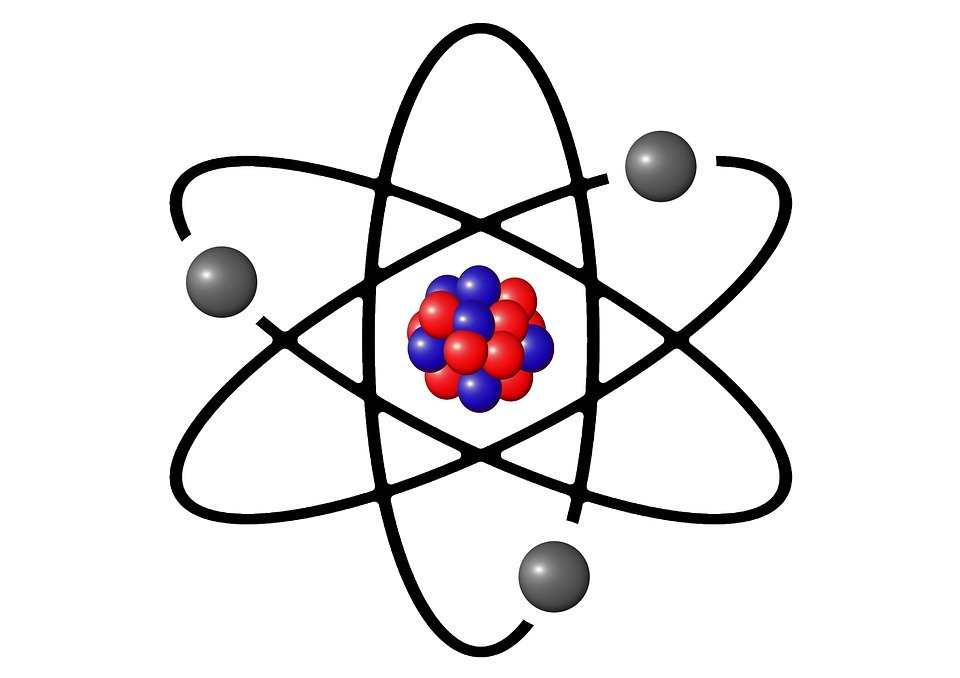 As humans, we are often mesmerized by the large size of our universe.

The imagination runs wild when we try to think of how huge outer space and the stars are.

However, there is another world that is just as fascinating. It’s a very tiny world and it all starts with the atom and its components. The human hair would need a million atoms to fit across it!

Have you ever wondered what would happen if we divided a substance ceaselessly into smaller parts? Would we reach a point where it would be impossible to divide the smaller pieces anymore? If so, these would be the ultimate particles that matter is made up of.

Atoms too can be divided further into smaller parts. This means they have an internal structure made up of smaller components.

All matter such as solids, liquids, and gases is made up of atoms. These atoms are combined in different ways to give substances their unique chemical properties.

Labeled diagram of an atom

If you are looking for a labeled diagram of an atom, here it is:

However, if you are interested in how the structure came to be and how scientists came to a consensus about the diagram above, then let’s go through the following sections together.

Scientists in the earlier years found that they could never peep into the insides of an atom using the microscope to know its structure.

It was too small for a microscope to be seen. So instead, scientists used clever guesses (called models) as well as experiments to dig out the secrets of the atom.

To gain a clear insight into the structure of an atom, let’s go through a few models:

This English chemist postulated that all matter is composed of atoms, which were indestructible and indivisible.

He also stated that atoms of the same element were the same whereas those of different elements differed in size and mass.

According to Dalton, atoms could be neither created nor destroyed but could be transformed from one form to another.

While Dalton’s model successfully explained various laws of chemical reactions like the law of conservation of mass, the law of multiple proportions, the law of constant properties, etc, it failed to explain the existence of isotopes (we’ll explain what it is shortly).

J.J. Thomson came up with the first guess about the atom’s structure called the plum pudding model.

It was a sphere that lacked a nucleus.

The positive and negative charges were distributed uniformly throughout the atom.

This model explained the neutral electrical charge of an atom but it left the question of the actual arrangement of the particles unanswered.

J.J. Thomson’s model was followed by Rutherford’s more accurate one.

Positive charge was also concentrated in the nucleus while the electrons circled the nucleus at high speed.

Rutherford’s model however has the problem that it was unstable.

The laws of physics (electromagnetism) dictate that when charged particles are accelerating (e.g. electrons orbiting a nucleus), they lose energy which should cause them to fall into the nucleus.

Since this wasn’t happening with atoms, it meant Rutherford’s model couldn’t be entirely accurate.

In 1913, it was Niels Bohr’s turn to inch even closer to the correct picture of the atom.

From his experiments, he pictured the atom as a miniature solar system where electrons circled a nucleus in distinct paths called shells.

Bohr’s model solved the problem that made Rutherford’s model unstable.

One more piece of the puzzle was solved by Chadwick when he discovered the neutron.

This helped to give a more accurate picture of how the nucleus was constructed.

Before this, scientists struggled to explain the excess mass they saw in atoms.

We now know that the nucleus is composed of not just protons but neutrons.

The neutron provided an additional mass that scientists could not explain. The neutron is a particle that has no electrical charge.

Though Bohr’s planetary model of the atom is very useful and accurate in explaining some properties of the atom, it is deceptive.

In reality, electrons don’t orbit the nucleus. Rather they are dispersed like a cloud around the atom.

This is because electrons don’t have exact positions in the atom.

This model is called the quantum mechanical model. It is the modern and the most accurate model to date.

It is also very sophisticated showing that the structure and organization of the atom are quite complex.

In this model, the electrons are still found in shells but their positions are probabilistic rather than exact.

Although the Bohr nuclear model of the atom is an oversimplification of the atom, it’s still useful to accurately understand the basic structure and property of the atom.

The nuclear model is the idea that atoms have a central nucleus that is surrounded by electrons.

Let us use a carbon atom to see how an atom is structured.

Atoms consist of 3 types of particles: these are protons, neutrons, and electrons. Each of these has different properties relating to mass, charge, and location in the atom.

Protons and neutrons are located in the nucleus where they are clumped together.

Electrons are found around the nucleus in orbits.

The mass of protons and neutrons is nearly the same while the electron is very light.  So, they don’t contribute much to the overall atomic mass of an element.

In fact, when considering the overall atomic mass of an element, the mass of an electron is often ignored so that the mass is calculated based on the number of neutrons and protons alone.

Protons and neutrons and electrons have electrical charges of +1, 0, and -1 respectively.

The number of protons and electrons in an atom is usually the same. For example, in the carbon atom, there are 6 protons (charge = +6) and 6 electrons (charge = -6).

This causes the electrical charges to cancel out and make the atom electrically neutral.

For our carbon atom example, we can observe the following properties from its structure:

This is the total number of protons and neutrons in the nucleus of the atom.

This mass excludes the mass of the electrons because they are too light and insignificant in contributing to the atom’s mass.

This is the number of protons of an atom. For the carbon atom, it is 6.

The atomic number is what gives an element its unique chemical identity and properties.

This is because of differing numbers of protons and neutrons. Such atoms are called isotopes.

Isotopes have the same number of protons but different numbers of neutrons.

Our first carbon atom has 6 protons and 6 neutrons to give a mass number of 12.

Our second carbon atom (pictured above) has 6 protons and 8 neutrons giving it a mass number of 14.

What started in the early 20th century as awkward forays into the secrets of the atom have ended up with a spectacular finish.

Thanks to the atom and its smaller parts, we can now enjoy nuclear power, electricity, electronics, atomic clocks, and more.

Literally, so much of our prized technology-obsessed life rides on this humbly small atom.