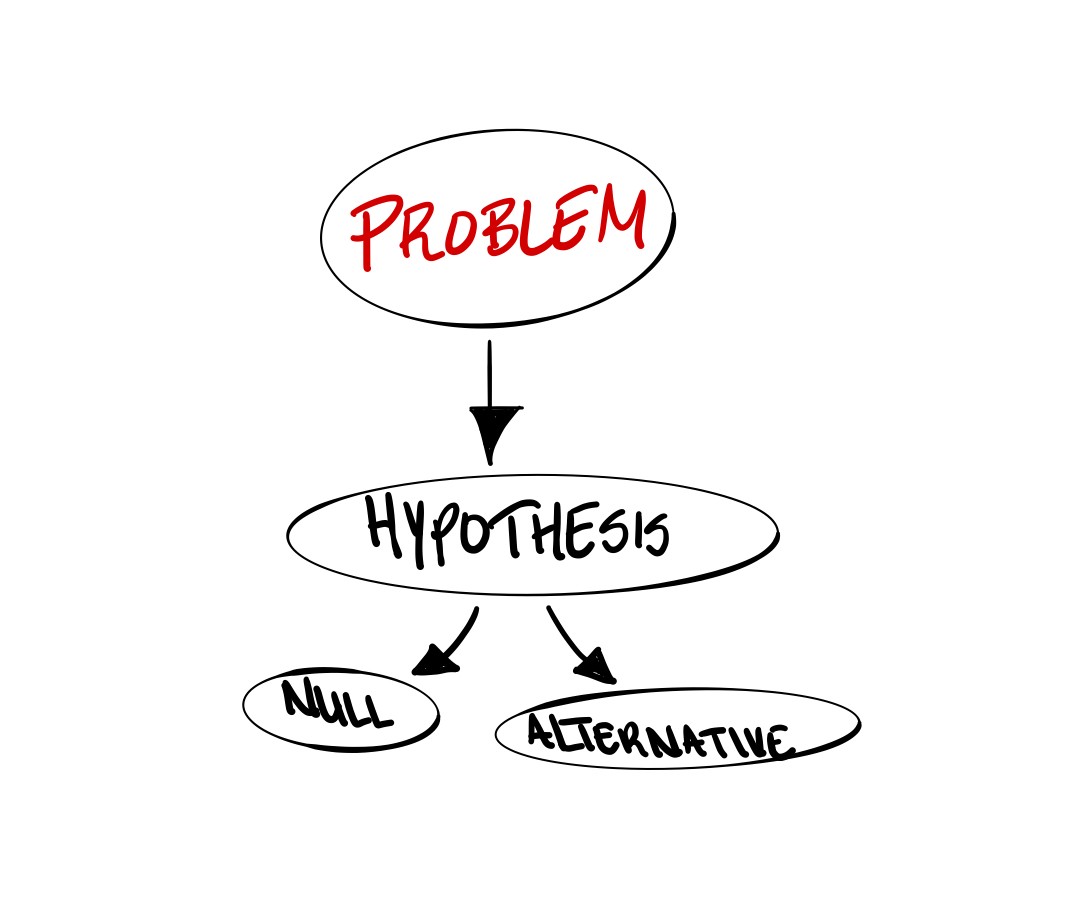 In statistics, researchers depend on hypotheses to make inferences. These are statements that assume that something about a population (a parameter) is true.

But how confident are they that it is true? This is where hypothesis testing comes in…

Hypothesis testing helps you to make an inference about if your specific findings are true or they can be explained by chance.

It involves choosing between two competing hypotheses called the null hypothesis and the alternative hypothesis.

The null hypothesis (H0) is the default hypothesis which is usually considered to be true from the outset.

It assumes that the suspected connection between the variables is not real and comes only by chance.

The alternative hypothesis (H1) takes the opposite position that assumes a definite connection. This is your predicted outcome.

Example of Null and Alternative Hypothesis

Null hypothesis, H0: The high death incidence of fish in Grand Lake, Colorado is not caused by mercury pollution.

As you can see, H0 claims that there is no relationship between fish deaths and mercury pollution.  H1 claims just the opposite.

Since the two hypotheses make opposing claims, they are mutually exclusive.

Through hypothesis testing, we want to know if enough evidence can be found to reject the null hypothesis and therefore support the alternative hypothesis.

If not, the null hypothesis remains valid. To do this, we use sample data.

Specifically, our hypothesis test asks: Is the connection (relationship) significant (real) or just a case of chance?

Since we can never be sure that our conclusions are true—as the findings are based on a sample, not the population—our decisions are based on probabilities.

So, we can only say that our conclusion is most likely true but not completely certain.

This is because even when you hope your conclusions were right, you could have committed either of these errors:

Using the steps, we have identified above for formulating and validating hypotheses.

Here are 8 examples of Hypothesis Testing that can be done in real life.

In a bid to curb COVID-19 mortality, governments want to understand if vaccination levels can reduce deaths.

H1 – vaccinated people are more likely to die than unvaccinated.

The significance level is 0.25

P-value – The p-value is calculated as 0.05 (lower than significance level) so we reject H0.

A tech company wants to know which gender among its online customers is its biggest purchaser.  This will help it determine whether to direct its ads mostly towards men or women.

The market director believes men are the biggest buyers. To test this, sample data is collected.

H1: the average purchase by each gender is significantly different (more men buyers)

The significance level is set at 0.05.

Determining Brinell Hardness Scores of metals is important for engineers.

It gives the hardness of a metal.

From a huge collection, a sample of metal pieces was tested. The engineer assumed that they would give a hardness score of 170.

If P-value was 0.11 and the engineer had set a significance level at 0.05, he would reject the null hypothesis.

An inventor wants to test his lawnmower for energy efficiency. He believes it can run on just 1 gallon of gasoline for 300 minutes. From a large cache of engines he randomly selects a sample for testing.

H1: running time is equal to or more than 300 minutes

If he measures P-value to be 0.08, this makes it greater than the significance level, so he would not reject the null hypothesis. His machine is not energy efficient.

Businesses sometimes want to know why a product introduced to the market failed.

H0: ergonomic design not cause of rejection

H1: ergonomic design is the cause of the rejection

P-value was found to be 0.09 which is higher than the significance level. So, the company will not reject the null hypothesis.

Brand value and recognition is a powerful asset which makes a company competitive against rivals.

A business wants to gauge the impact of its recent ad campaign on brand recognition which it believes was successful on at least 40% of the target market. It surveys the market.

H0: percentage of recognition in the market: less than 40

H1: percentage of recognition in the market: 40 or more

If P-value is 0.07, we do not reject H0 and conclude that the brand recognition is low.

A computer supplier claimed that all computers sell at an average price of $1,005.

As the representative of a large consumer group, you think it’s actually lower so you carry out a price check of a random sample of vendors.

If the p-value is measured at 0.12, it means you don’t reject the null hypothesis.

A bakery’s recipe for its bread aims to have 5 grams of fat in each serving. Its quality control department runs a sample to test for quality conformity.

H1: grams per serving not equal to 7g

The level of significance is 0.05

If the p-value is 0.04, this means the null hypothesis should be rejected.

There you have it; 8 examples of hypothesis testing in real life.

Hypothesis testing is a very important step for researchers to validate their research findings and support decision-making.

It helps them to establish theories either by maintaining a null hypothesis or advancing new ones called alternative hypotheses.