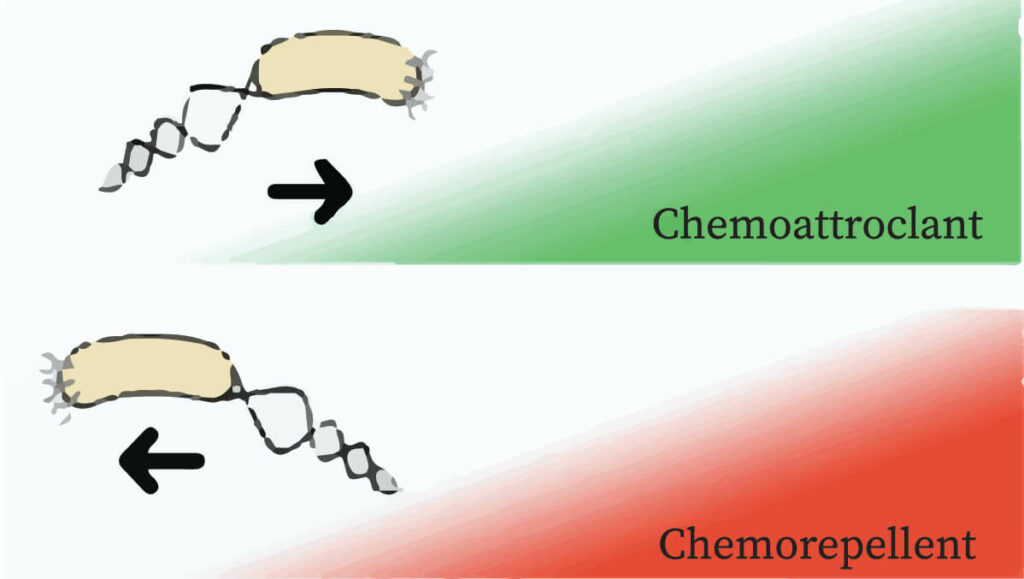 Chemotaxis is a phenomenon where somatic cells, single-celled and multicellular organisms, and bacteria direct their movement according to specific chemicals in the environment.

Such chemical concentration gradient stimulated movements are crucial for the survival of the organisms.

In bacteria, for instance, the process is critical for finding where there are high concentrations of food molecules.

Similarly, in eukaryotic cells, chemotaxis is important for early development and regular function and growth processes.

In this post, we will concentrate on some of the top examples of chemotaxis or rather real-life instances where this phenomenon is applicable. Before then, let’s learn a few basics:

Chemotaxis can be positive and negative. Here is a quick look at each.

Positive chemotaxis is a phenomenon where the organism moves to an area where there is a high concentration of a specific diffusible substance.

In other words, the chemicals (or the diffusible substances) attract the microorganism.

The movements of microorganisms to food or sperm cells to the egg for fertilization are perfect examples of positive chemotaxis.

Negative chemotaxis is a case where the microorganism moves away from an area where a particular chemical is in high concentration.

In essence, the microorganism is moving away from the chemicals (or diffusible substances).

In most cases, the phenomenon comes about when the microorganisms are running away from a threat, such as poison or killer cells.

This phenomenon differs from chemokinesis in that the gradient alters the probability of motion in one direction, but not the frequency and rate of random motion.

The Importance of Chemotaxis

So, why do organisms need Chemotaxis?

As explained earlier, cellular organisms move towards the area where they can get food.

They also move away from areas where they are likely to die from poison.

Without Chemotaxis, it would be hard for the cells to survive, as they would lack food or be destroyed by threats.

In multicellular animals, chemotaxis plays a role in early development.

In fertilization in mammals, for instance, sperm cells are attracted towards the egg via chemical signals that it produces as it moves through the fallopian tubes.

Without chemotaxis, it is not possible for the gametes to find each other and join.

C. For the Normal Function of the Cells

Some cells use chemotaxis for their normal functions. For example, the white blood cells use this phenomenon to identify areas in the body that are injured or infected for them to act.

Besides, these cells contribute to inflammation in different parts of the body that results from chemotaxis behavior.

Examples of Chemotaxis in Real Life

Prior to fertilization, a human egg produces chemicals called chemoattractants as it slowly moves from the ovary to the uterus.

Once the sperms are introduced into the vagina, they use the chemicals as a cue to find the egg and move in that direction.

These chemoattractants prevent the sperm from traveling in the opposite direction. This ensures that there are enough sperms that reach the egg for fertilization to take place.

Otherwise, it is likely that the sperm will die off before reaching the egg.

2.  Movement of Bacteria in Organisms

There are various types of bacteria that live in multicellular organisms and a wide range of environments.

These bacteria use chemotaxis to feed and survive. As for feeding, bacteria move to areas where there is a high concentration of glucose. A good example of these areas includes those near the villi on the wall of the small intestine.

The process also helps bacteria to move to the areas of the body where the conditions are right for their growth like the respiratory system or the digestive system. Here, they are able to reproduce and spread to other parts of the body.

On the other hand, cells move away from threats such as chemicals and unfavorable chemical environments.

In lab experiments, for example, phenols are known to inactivate microbes through the inactivation of enzymes and cell lysis.

When phenol is introduced, bacteria tend to move away from areas where there is a high concentration in order to survive.

This is the same process that occurs when chemicals in the form of medicines are introduced to diseased areas of the body.

Neurons are messengers. They use chemical signals and electrical impulses to transmit information from one part of the brain to another and to the rest of the nervous system.

Neural migration is important for the proper communication of different parts of the body to the brain.

In mammals, new neurons start by polarizing and extending a leading process towards the migration direction.

The process is initiated and regulated by a number of chemoattractive and chemorepulsive chemicals.

4.   Movement of Leukocytes to the Area of Injury

Leukocytes attack bacteria and other pathogens that cause infections.

They are usually part of the immune system and circulate in the blood to provide cellular responses to any attack.

The movement of these cells to the site of infection or injury is facilitated by chemicals called cytokines that signal the white blood cells to travel to the region.

Besides, endothelial cells in the area that suffers from infection or injury produce chemoattractants and cellular adhesion molecules that attract, arrest, and hold on to the white blood cells at the location of infection.

On the other hand, unregulated chemotaxis of immune cells may lead to inflammation.

Some of the popular inflammatory diseases that result from chemotaxis include arthritis and asthma.

Both conditions result from the process discussed above, but the movement is unregulated. This causes the patient to develop symptoms of inflammation.

The movement of metastatic cancer cells is the major cause of the spread of the condition and the death of the patient.

In cancer cells, the mutation and changes in the regulation of various body processes cause pathways to be reprogrammed in favor of the movement of the cancer cell.

The change in the chemical composition of the environment in which the tumor is growing then causes carcinoma cells (cancerous cells) to move from the initial location to a distant site where they grow and multiply.

The study of chemotaxis in cancer cells helps in coming up with possible therapies.

Symbiosis is the close union of two dissimilar organisms for mutual benefits.

A good example of this union is that of leguminous plants and nitrogen-fixing bacteria called rhizobia. The plant’s associated bacteria respond to certain compounds that the plant produces.

The response of the bacteria to the chemical determines whether it gets attached to the plant or moves away.

It also gives certain bacteria a competitive advantage over others, especially different strains of the same organism.

This way, the plant ‘chooses’ the bacteria that will benefit both participants.

Chemotaxis is the movement of organisms based on a chemical ‘gradient’.

The change in the chemical environment causes microorganisms and cells to move closer or away. This enables them to survive, get nourished, grow, or function.

There are several instances of chemotaxis in real life in animals, plants, and microorganisms.