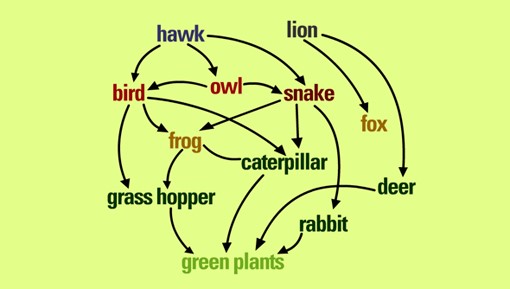 The natural ecosystem is designed in such a way that organisms either make their food or feed on others.

In the end, the apex consumers die and are digested by organisms called decomposers.

There are two types of producers in the food chain: photoautotrophs and chemoautotrophs.

The energy to perform these processes comes from the heat generated from solar radiation.

Each green plant makes its food through photosynthesis using the green coloring matter on the leaves, called chlorophyll. This glucose helps build parts of the tree such as the stem, leaves, and fruits.

They live in places where sunlight and carbon dioxide are unavailable or unreliable, such as deep in the oceanic floor, dark caves, and volcanic vents.

Plants come in many types. These include trees, shrubs, legumes, weeds, moss, and grass, among others.

Plants use the glucose they create to make food for other levels in the food chain. Consumers eat their fruits, grain, leaves, and stalks.

One of the by-products of the food-making process is oxygen, which consumers breathe to stay alive.

Once plants die, they decompose and add organic matter to the soil. All these benefits make producers an important part of any ecosystem.

Phytoplankton are microscopic plants that float in the water. They do most of the photosynthetic activity on the surface of the ocean in the presence of carbon dioxide.

This way, they help maintain oxygen levels for the ocean ecosystem as well as the atmosphere.

The organisms are fed by microscopic herbivores called zooplanktons, which ‘in turn’ are fed by larger animals in the ecosystem.

They are microscopic organisms that are found in all water types. They use the sunlight to make their food in the presence of nitrogen and phosphorus.

These organisms multiply very fast in a mineral-rich environment, creating blooms that spread on the water surface and are visible to the naked eye.

Some cyanobacteria are harmful to humans and animals. Therefore, you should keep away from them.

Deep in the ocean, sunlight cannot penetrate. Therefore, organisms that live there cannot photosynthesize like plants.

Instead, the single-celled bacteria are chemosynthetic and use energy sources from chemicals around them.

Some sources of energy that they utilize include nitrogen, sulfur, and methane. They oxidize these chemicals to manufacture sugars for use in their physiological processes.

There are also nitrogen-fixing bacteria found on the land at the root nodules of leguminous plants.

They convert the free nitrogen to ammonia, which plants use. The symbiotic relationship helps both legumes and bacteria to survive.

Protists are a group of eukaryotic organisms (have a nucleus) belonging to the kingdom Protista. They include protozoa, water, and slime molds, and algae.

Like other producers, protists are essential sources of nutrition for several organisms—from bacteria to mammals.

Some are consumed directly while others (like photosynthetic dinoflagellates) use sunlight to fix inorganic carbon, which is in turn used by coral polyps that house them.

There are also anaerobic parabasalid species that live in the digestive tracts of termites where they aid in the digestion of cellulose ingested by these insects, especially when they bore through wood.

Another example of producers that you may come across is secondary and tertiary producers.

The former is used to denote animals (like herbivores) that produce the biomass for their predators while the latter refers to carnivores that are eaten by other species.

Producers keep ecosystems alive by producing food for other levels.

There are producers across any environment, including the darkest abyss. We all survive in the world due to the food that comes from them.

In addition, photoautotrophs remove excess carbon dioxide from the atmosphere and replace it with oxygen, making the world a habitable place.

Look around at the greenery around you and appreciate the superb task of supporting life, as we know it.