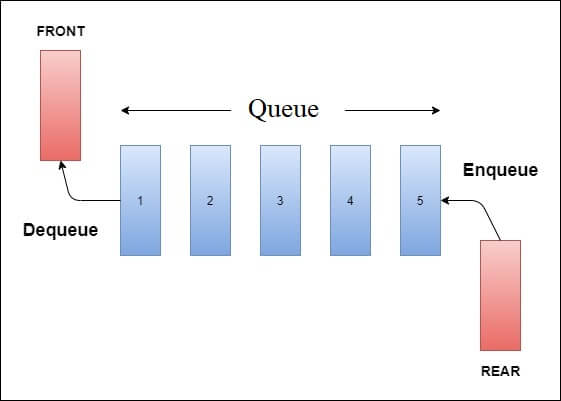 A queue is an abstract data structure with a linear form that shows the order in which operations should be done.

It is frequently used in computer science or programming to model real-life queue situations.

A queue has certain special operations that can be performed on it.

The queue operates on a first come first serve basis or (First in First Out)  FIFO.

One end of the queue is always reserved for adding new items (enqueue) while the other end is for removing items (dequeue). This is identical to queues where you can only join at the tail and only get served from the front.

Other operations you can perform on a queue are:

A special type of queue called a priority queue does not work in the FIFO rule. Instead, it assigns weights to the items and serves them according to those weights.

Queues are quite similar to stacks (another data structure) but they differ in a number of ways:

Queues reduce chaos and introduce a smoother and more streamlined method of service.

The need for queues in real life is usually dictated by the need for fairness (people objecting to waiting too long to get served) as well inadequacy of resources (limited time or staff sizes so those who come first gets served first).

Here are 10  applications of queue in real life:

Due to a shortage of organs such as kidneys, heart, or liver, patients in need of a transplant are often put on a waiting list.

When a donated tissue is available, the first or least recent patient is given priority in getting the organ.

This is an example of a queue because it adheres to a first come first serve model.

Some activities in a country such as mineral mining, frequency allocation, etc may require permission by obtaining a license.

If it’s an opportunity that is limited and many people are interested in it, the government could follow a first come first serve basis.

At ticket windows where people buy tickets for a show or booking for flights, those who reach the window first are served first.

Companies with customer requests have to process and deliver the orders. They are usually done on a first come first serve basis.

Priority queues are based on priority. A good life example of a queue with priority characteristics is at hospitals where more seriously ill patients are attended to before others in the queue.

Another one is where people ahead in queues give up their places for a child or a pregnant woman when in a ticket queue.

Sometimes during bad weather or runway unavailability, incoming flights may be instructed by the controllers to take a holding pattern where they circle in the air for some time before being cleared to land.

This is done for safety or to avoid accidents. The clearing for landing may follow a queue process where the first plane to hold pattern is cleared to land first.

People who apply to become citizens or residents are screened for eligibility as they wait.

Vehicles that arrive first at the booth are the first to be released. Those that arrived later are released last.

This conforms to a queue with first come first serve principles.

A gun loaded with cartridges discharges its bullets in succession when fired.

The discharge takes place in the order in which the cartridges were placed in the magazine.

Routers are network devices designed to direct data. They receive packets and transmit them to their destinations.

To manage numerous requests, they usually use the FIFO queuing method as the default where the first to arrive is the first to be served.

Queues are a vital way of managing clients or processes whether in real-life situations or a virtual environment.

Through them, slowdowns, crashes, and even disappointed customers can be minimized.