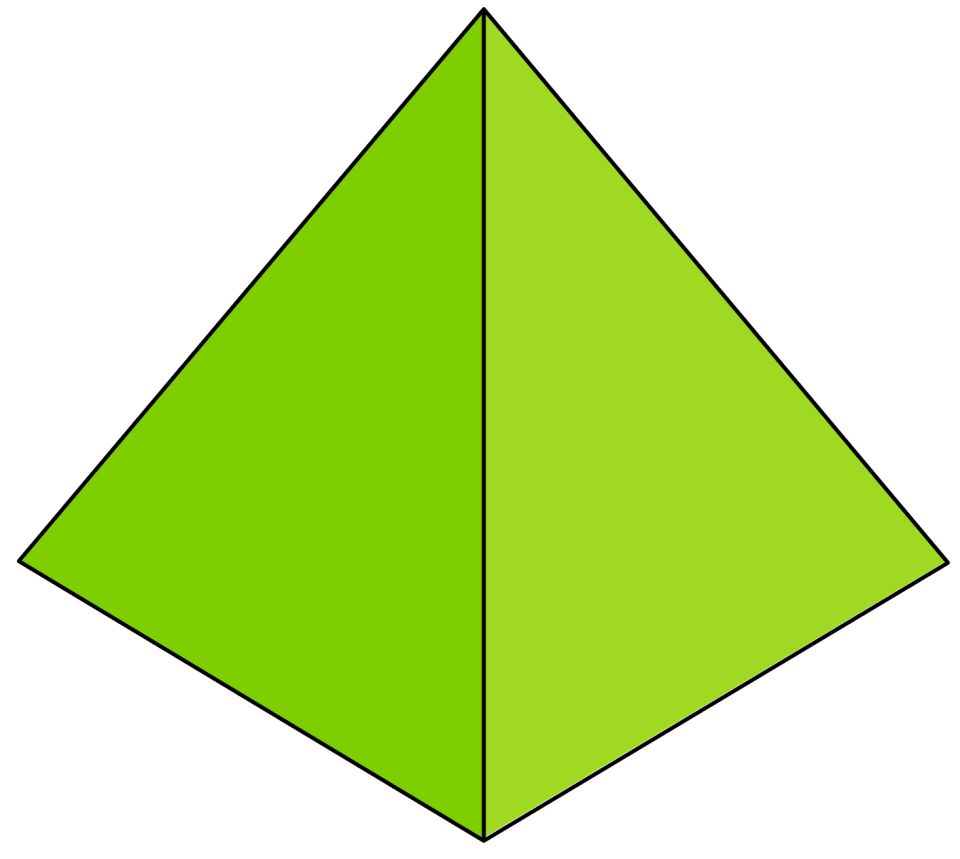 A wide base and a pointed top, pyramids are three-dimensional shapes that feature a flat base and three or more triangular faces.

The faces meet at a point (the top of the pyramid) forming the apex (the pointy top). The faces may be the same size or different sizes.

A pyramid with a square base is known as a square pyramid.

There are two types of square pyramids:

1. The Great Pyramid Of Giza

The pyramids of Egypt are the most famous examples of pyramids in real life.

These pyramids were constructed as the final resting place of the pharaohs of ancient Egypt.

The pharaohs were buried in these pyramids with all their belongings.

The Great Pyramid of Giza is one of the oldest pyramids and also the largest. It is believed to have a square base and is, therefore, a square pyramid.

A hipped roof or hip roof is a modern roof design that is in the shape of a pyramid.

These roofs have four faces that slop and unite at a mutual ridge. This ridge is known as the hip.

This shape of roof is used for its durability and reliability. It also provides a luxurious look.

The roof’s base is where the roof meets with the top of the walls of the house.

A hipped roof that covers a square home is an example of a real-life square pyramid.

Teepees are constructed in a pyramid shape. This shape ensured a strong structure that could be easily assembled as the tribes moved from place to place.

Many teepees feature square bases and are therefore square pyramids.

4. The Nubian Pyramids of South Sudan

The Nubian Pyramids are a collection of about 200 pyramids in the eastern part of Sudan.

They are located along the banks of the River Nile and are believed to have been built between 720 and 300 BC as tombs of kings, queens of the Meroitic Kingdom.

These pyramids are much smaller than the Egyptian pyramids and many feature square bases making them square pyramids.

The temples of the ancient Aztecs were constructed in pyramid shapes. However, they featured different shapes at their bases.

Temples such as the Chizen Itza in Mexico featured square bases. The Chiza Itza features staircases on all four faces leading to the apex where prayers and sacrifices were made.

Camping tents are designed to provide shelter for those traveling in the great outdoors.

They often feature pyramid shapes that are constructed from cotton canvas or synthetic waterproof material.

The pyramid shape provides for a strong structure and prevents debris or water collecting on the roof of the tent and weighing it down.

Cellular towers are erected throughout the country to enable the transmission of signals. This network of towers ensures that we are able to communicate over a wireless network.

The towers feature steel frames that make up the edges of a pyramid.

Many towers are built with square bases for even distribution of weight. They are square pyramids.

The only thing that is better than chocolate chips is chocolate pyramids.

Chocolate comes in various shapes and chocolate pyramids are quite popular.

Many manufacturers make their chocolate pyramids are made with square bases. They are a delicious example of square pyramids in real life.

From our kitchens to the structures we live in, square pyramids are everywhere around us.