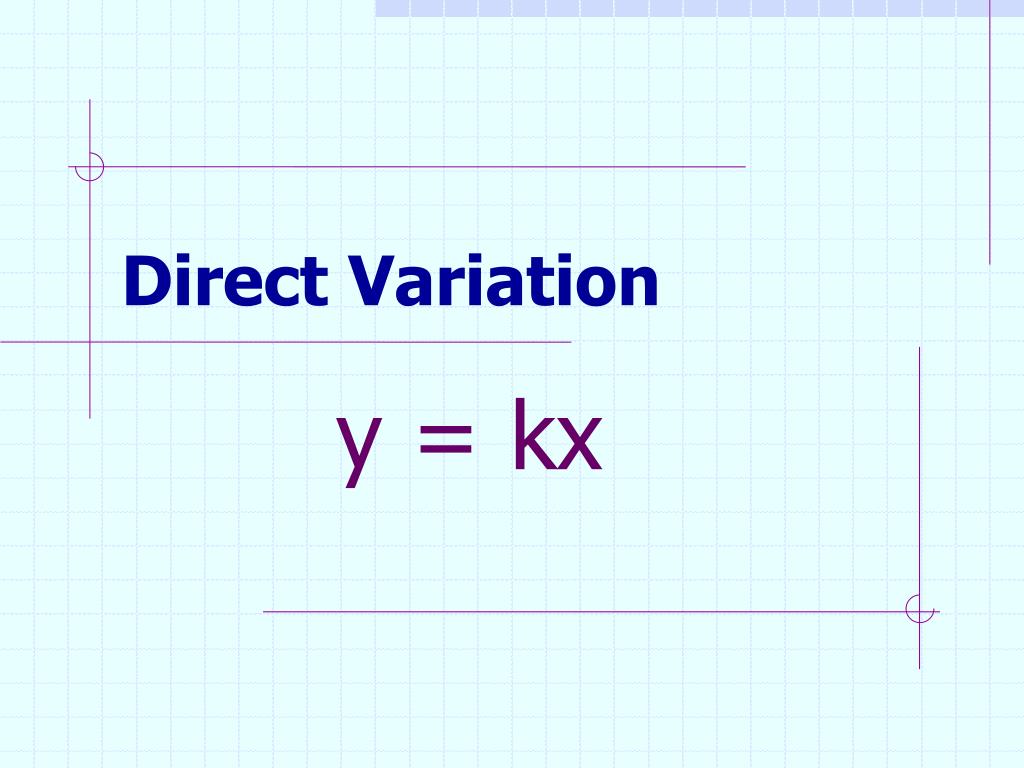 Direct variation is a mathematical concept that describes the relationship between two variables.

The relationship can be expressed in the form of an equation whereby one variable is equal to a constant times another variable i.e. y =kx where y and x are variables and k is a constant.

The value of y, therefore, changes proportionately to the change in x. This means that if x increases, y will increase, and if x decreases, y will decrease. However, the ratio between them will remain the same (constant).

Direct variation isn’t a concept that is only applied to solving equations in the classroom. There are many instances in life where we encounter direct variation.

Many workers are paid based on the number of hours they work. The more hours worked result in more money paid.

The two variables in this situation are the amount paid for the work (y) and the number of hours worked (x).

In this example, if the hourly wage was $20. $20 would be the constant (k). The total amount of money the worker will be paid is directly proportional to the number of hours they work. If they work for 5 hours, they will be paid $100 i.e. $20 x 5.

The distance you cover when driving or walking in a specified time is directly proportional to the speed at which your vehicle is traveling.

In this example, y (the distance covered) is equal to k (the time) times x (the speed at which you are traveling).

The recipes we use to prepare our meals employ the concept of direct variation.

If your recipe gives measurements for 10 cupcakes and you want to make 20 cupcakes. You will have to double your ingredients in order to get more cupcakes.

In this example, y is the number of cupcakes and x is the measurements for your ingredients e.g. 1 cup of flour.

4. The Amount Of Money Spent On Purchases

In this case, y is the amount of money used for the purchase and x is the cost of a single item. For example, if one gallon of milk costs $4 and you want to purchase 10 gallons, you would spend a total of $40 on milk.

Have your utility bills increased? The cost of your utilities is directly proportional to your consumption.

For example, the amount you are billed for electricity (y) is based on the amount of energy consumed (x) in a given period.

Electricity supply companies charge a constant rate per kilowatt-hour (k). Therefore, your bill will increase if you increase the amount of electric energy consumed.

Direct variation also applies to other utility bills such as gas and water.

6. Number Of Calories Burned in An Activity

Keeping track of the number of calories you burn during an activity is an important part of health tracking.

The number of calories you burn is not only dependent on your weight and pace/intensity, but also on the length of time or distance covered during the activity.

For example, if a person running at constant pace is able to burn 500 calories when they run 5 miles, they will burn half (250) of the calories if they run at the same pace for only 2.5 miles.

7. Stretching Of A Spring

A spring will stretch out in proportion to the amount of weight placed at the end of the string.

The spring will stretch 12cm when a 20-pound bag of rice is placed at its end.

This direct variation is applied to the design of weighing scales.

The number of gallons of gas that a car consumes varies directly with the distance it covers.

The more money you put into the account, the higher your bank balance will be.

10. Time It Takes To Fill A Tank Of Water Using A Pump

The volume of water in a tank is directly proportional to the length of time that the pump was switched on.

There you have it; 10 practical direct variation real life examples.

As you can see, direct variation isn’t limited to equations solved in the classroom.

It is applied to many of the tasks we carry out on a daily basis.