13 Examples of Hyperbola in Real Life 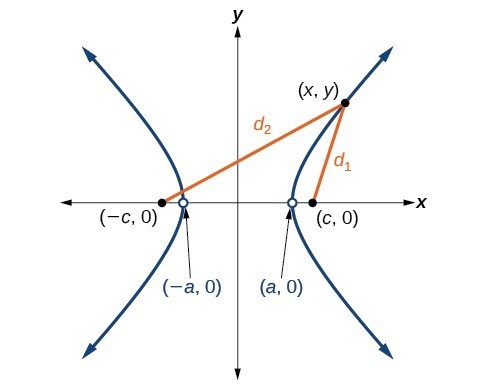 Hyperbolas can be hard to visualize and understand at first. To help you out, we will take a look at the definition of hyperbolas, where they come from, and check out real-life examples.

To better understand hyperbola, we should take a look at cones.

You can get various shapes when you cut a cone into different sections.

A conic section is obtained when a plane intersects with the surface of a single cone or a double cone.

The angle of intersection between the plane and the cone determines the section. There are four conic sections:

A hyperbola is formed when a plane slices through the edges of a right circular double cone at an angle greater than the slope of the cone.

It has two symmetrical components which look like two opposing bow-shaped curves.

A hyperbola can also be described as the set of all points (x, y) in a coordinate plane whereby the difference of the distances between the foci and (x,y)is a positive constant.

The foci are the two fixed points located inside each curve of a hyperbola.

Examples of Hyperbolas in Real-Life

The Kobe Tower is a famous landmark located in the port city of Kobe, Japan. It’s a beautiful steel tower that offers scenic views of Kobe.

Its gorgeous hourglass design makes it a hyperboloid structure.

In construction, less material is used for a hyperbolic building compared to other conic shapes.

When compared to straight buildings, hyperboloid structures have greater stability against outside forces.

Though they have a decorative effect, hyperbolic structures have low space efficiency.

A cooling tower removes process heat from circulating water in most power plants.

Water is drawn from a reservoir and is circulated within the plant. This water passes through a cooling tower where its temperature is lowered.

Then the water goes back to its source. Waste heat is released into the atmosphere. Most nuclear cooling powers have a hyperboloid shape to maximize the cooling effect.

A hyperbolic shape enhances the flow of air through a cooling tower. It also adds to the strength and stability of the tall structures.

Cooling towers need to be tall to release vapor into the atmosphere from a high point.

The shape of a guitar’s body affects tone resonance. It also affects how you stand or sit with the guitar.

The narrow portion of a classical guitar known as the waist looks like a hyperbola.

The Mae West sculpture stands on top of the Effnertunnel in Munich-Bogenhausen.

The Munich tram drives through the 52-meter high structure.

The sculpture was designed by Rita McBride and is a rotational hyperboloid made from carbon fiber.

It’s named after the actress Mae West and is meant to mimic her hourglass figure.

A quick way to see a hyperbola in real life is to turn on the light under a lampshade that is placed on a tabletop.

The light will cast a hyperbolic shadow on the adjacent wall.

The Corporation Street sky bridge was built after an old footbridge was destroyed beyond repair in the 1996 Manchester Bombings.

The hyperboloid bridge is located in Manchester City and connects the Marks & Spencer building to the Arndale Centre.

Gears are used to alter the speed, direction, and torque of a power source such as an automobile.

The design of the Cathedral of Brasilia is meant to mimic hands moving up towards heaven. This monumental hyperbolic structure has 16 curved concrete columns. Its floor is large while its ceiling tapers upward.

The abandoned Ciechanow water tank is located in north-central Poland. It consists of a tire-shaped steel tank supported by a strong hyperboloid frame.

Hyperboloid structures have the strength to support heavy objects, such as water tanks, far above the ground.

10. Ripples in a Pool of Water

Concentric circles of ripples are formed when two stones are thrown into a pool of water at the same time.

These concentric circles move outward and intersect at certain points to form hyperbolas.

Radar systems apply this property of hyperbolas to locate objects by sending out sound waves from two point sources.

Hyperbolas are formed where the concentric circles of the sound waves intersect.

The Dulles international airport has a saddle roof in the shape of a hyperbolic parabolic.

Its roof follows a concave curve about one axis and a convex curve about the other. This means that has a three-dimensional curve that is a parabola in one cross-section and a hyperbola in another cross-section.

Hyperbolic mirrors are used to enhance precision and accuracy when focusing light between focal points in an optical telescope. These mirrors are used in Cassegrain telescopes to help to correct distortions in fast optics.

Because they are more expensive, hyperbolic mirrors are not common in amateur telescopes.

Some comets may follow a hyperbolic path when they pass through our solar system.

When objects from outside the solar system are not captured by the sun’s gravitational pull, they will have a hyperbolic path.

Such objects travel through the solar system and never return.

There you have it; 13 examples of hyperbola in real life.

As you can see, hyperbolas have many real-life applications. They play an important role in architectural design, radar systems, calculus, radio systems, and astronomy.

To spot hyperbolas, look out for objects with opposing curves.