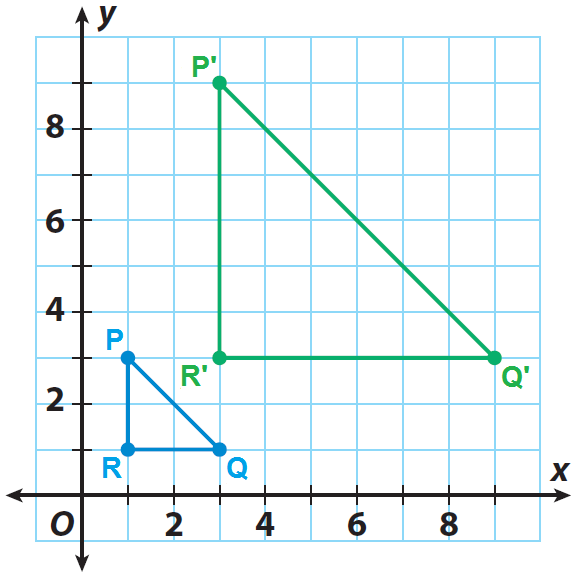 Dilation is taking place around us all the time. From pupil enlargement to forensics, it is a fixture of our environment.

In geometry, whenever figures are allowed to change, flip, move or undergo a change in their shape, we say they have been transformed.

Dilations are a special kind of transformation that makes a figure bigger or smaller without changing its original shape.

To do so, it employs a scale factor R (or ratio) which determines how much the figure will reduce or enlarge.  It also uses a center of dilation, which is a fixed point on the plane.

To perform dilation, you start with a pre-image (your original figure) and end up with an image, which is a new figure.

You can use dilation calculations to perform enlargements and reductions of figures.

You use the scale factor to dilate your preimage by multiplying it with the coordinates of the preimage.

You can also use the absolute value of the scale factor to multiply it with the lengths of the sides of your preimage.

The amount by which your preimage will be dilated is summarized below with the scale factor k representing a number.

When a figure is expanded or shrunk through dilation, the following remains true:

Example of a dilation (expansion)

If we dilate it by scale factor k=2, the new figure will be calculated as follows:

Multiply all the coordinates of the original figure with 2:

If these new coordinates are plotted on a graph, they will yield a dilated image that is double the original figure in size.

Example of a dilation (contraction)

Multiply all the coordinates of the figure ABC with 1/2:

The result is an image or figure that is half the size of the original figure.

Let’s now look at examples of dilation in real life.

Dilations are frequently employed in image processing or graphics.

Through it, wallet-sized pictures can be enlarged to wall hanging sizes.

You can conveniently adjust the size of your photo to fit in any space you want.

Through a process called morphology, the feature of an image can be enhanced.

Police make use of dilation to increase the size of images and photos so that they can see many details that are hard to see. This helps them to solve crimes and convict criminals.

Dilation helps to detect the presence of dilated cardiomyopathy which causes the heart’s left ventricle to stretch and thin.

Architects usually use a model or prototype when designing a building. To make their building identical to the model, they dilate it by adjusting the scale and measurement.

Our eye pupils dilate to control the amount of light intake.

Doctors use a special eye drop to produce the same effect of dilating your eye pupil. This makes examining the patient’s eye easier and they can see the back of the eye.

6. The Zoom Function of Google Maps

When a Google Maps user clicks the zoom controls, the map enlarges in response to each click.

We end up with a dilation which is a bigger image than the original but retaining the shape.

Companies and brands usually offer different size versions of the same products to the market.

Soap, drinks, shoes may be similar in shape but differ in size or quantity to fit customers with different needs.

Grow toys are toys that are expandable or grow when placed in water. They also shrink when placed in salty water. This is an example of dilation as it retains its shape but alters size.

This is a set of wooden dolls placed inside each other. They are placed so that they are in decreasing size.

It has a feature allowing the user to adjust the viewing window.

This is a zoom function allowing the user to reduce or expand the window without changing its shape.

Dilation is a useful process that is used in geometry and in solving problems.

In this post, we have looked at 10 cool examples of dilation in real life.

Essentially, many objects can be stretched and shrunk to achieve varying goals in many real-life situations.