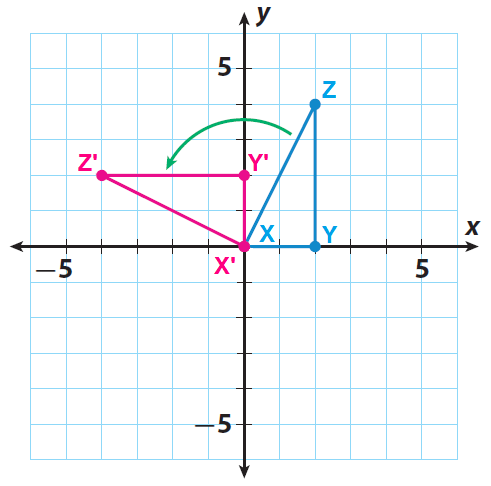 Rotation is a mathematical concept that involves the turning of a shape about a fixed point.

The object and its rotation are the same size and shape.

However, the shapes may face different directions.

Rotation can also be defined as the motion of a space or rigid body about a fixed point.

It is therefore different from other types of translation as it is the only type of motion that involved a fixed point.

The earth rotates about its axis every 24 hours relative to the position of the sun. This rotation is an example of rotation in real life.

The earth’s axis is the fixed point about which the earth rotates. The rotation of the earth results in night and day and was used to develop a system to measure time.

A day is defined by the length of time the earth takes to complete a single rotation on its axis. This is 86,400 seconds or 24 hours.

The earth’s rotation is the result of inertia.

Windmill features blades that are shaped like propellers. When the wind blows, the blades rotate about a fixed point(the main shaft).

The windmill blades are connected to a rotor that rotates along with them. When the rotor spins, it transfers mechanical energy into a generator. This results in the generation of electricity.

The mechanical energy generated by the rotation of the blades of the windmill can also be used to mill grain or pump water from a well.

A pinwheel is a toy that consists of paper folded into a wheel that is in the shape of a flower. The wheel is pinned to a stick.

The pin acts as the fixed point about which the wheel spins when it is blown by the wind or by a person.

Every single blade of the Pinwheel rotates about the pin which is a fixed point. The blades, therefore, exhibit rotational motion as defined in geometry.

Pinwheels are a popular toy. Many people use them as a reminder of their childhood. Others use them as décor for gardens and other outdoor spaces.

Ferris wheels are major attractions in fun parks as well as carnivals. These amusement rides consist of a large upright wheel that holds multiple passenger cars, cabins or pods.

The passenger cars are attached to the rim of the wheel in a way that keeps them upright throughout the wheel’s rotation.

The wheel is attached to a central shaft. This shaft is the fixed point. The passenger cars on the rim of the Ferris wheel rotate about this fixed point.

The tallest Ferris wheel is the High Roller Ferris Wheel located in Las Vegas, Nevada. It is 550 ft tall.

Merry-go-rounds or carousels are amusement park rides that consist of multiple passenger seats that may be in the form of cars, horses, or other creative forms.

The passenger seats are attached to the roof and floor of the carousel. The floor and roof spin about the center of the carousel taking the riders on their seats with them.

Merry-go-rounds are especially popular amongst children.

Clock faces consist of two arms (the minute and hour hand). These arms rotate about a pinpoint (the fixed point) in the center of the clock’s face.

As the arms rotate, they point to markings or numbers about the circumference of the circle.

The arms of the clock exhibit rotation by moving about the pinpoint that holds them fast to the clock face.

Fans are used to blow air. They consist of blades that are attached to a rotor.

When the fun is turned on, the blades are set in motion. They rotate about the main shaft.

The main shaft in this case is the fixed point about which the blades rotate.

The rapid rotation of the blades pushes air outward resulting in cooling.

Fans are used in homes to keep them cool and comfortable in warm weather. They are also used in vehicles to keep engines cool during operation.

The movement of the forearm about the elbow is an example of a rotation.

When picking up a cup from a table, eating or even strumming a guitar, your forearm moves up and down about your elbow.

This hinge joint only allows for up and down movements.

Your forearm is rotating about an axis (your elbow).

There are several other hinge joints in the body including the knee. The motion of kicking a ball involves your lower leg moving at an almost 90-degree angle about your knee joint.

The movement of a door is a good example of rotation that we encounter on a daily basis.

Many traditionally designed doors are supported by hinges. These hinges are fixed to the door frame.

The door opens and shuts the doorway by moving about the hinges. The hinges in this case are the fixed point about which the door is rotating.

The door maintains this fixed point of rotation throughout its motion in closing or closing.

Helicopters are aircrafts that offer the advantage of being able to take off and land from a spot. This is because they can move up and down along a vertical plane. This is made possible by their rotor blades.

Unlike airplanes, helicopters depend on rotor blades to fly and not wings.

This rotation forces air down and causes a lift force that is strong enough to lift the helicopter’s weight into the air.

Rotation is a mathematical principle that is applied in the design of various machines around us including washing machine tubs, gears, drills, and much more.

A look around your home will reveal many items that apply this principle in their functions.

10 Examples of Translation in Real Life

10 Real-Life Examples of a Plane in Geometry