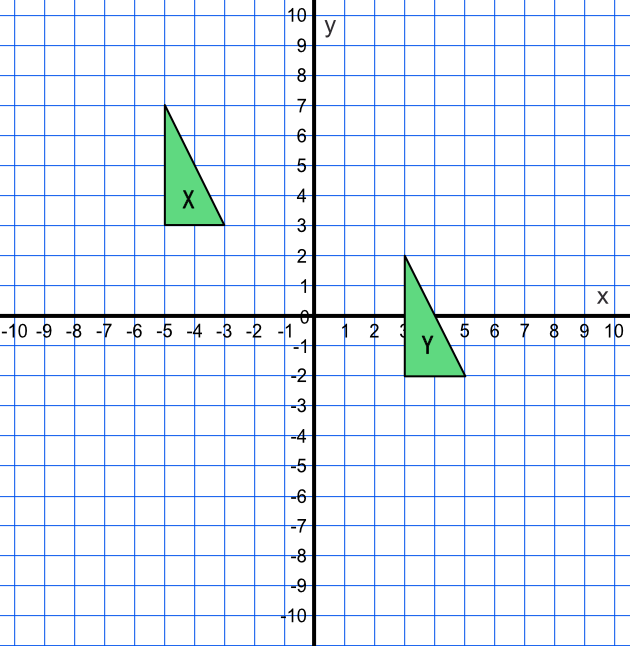 Translation is a type of transformation that we encounter daily in real life. It is the movement of a shape from one place to another.

This movement involves the changing of the position (or coordinates) on a plane.

However, the change does not involve changing in the size of the shape or the direction in which it faces.

There is no flipping. The shapes simply move to a new position. Every point in the object is moved the same distance in the same direction.

Shapes can move along a horizontal plane i.e. left to right. Negative values represent horizontal movements from right to left.

In many instances, translations involve both vertical and horizontal movements.

Elevators are used to move people and other objects from one floor to another.

Elevators move up and down along a vertical plane.

There is no change in their shape, size or orientation during the movement.

2. Airplanes flying across the sky

Airplanes move along a horizontal plane as they move across the sky.

There is no change in shape, size or orientation of the airplane as it moves from one point in the sky to another.

Translation is used in aircraft navigation to ensure aircrafts keep to their course and avoid accidents such as mid-air collisions with other aircrafts.

3. Cars driving along a street

Cars driving along a street move along a horizontal plane.

When they move from one point in the street to another, they change position without changing their orientation, shape or size.

This movement is an example of horizontal translation.

Cars moving along an uphill or downhill street will also exhibit vertical as well as horizontal changes in position.

4. Sliding on a slide

Slides are quite popular, especially in playgrounds and waterparks.

Sliding down a slide involves changes in position along both the vertical and horizontal plane.

However, the person (shape) sliding down the slide does not change in shape, orientation or size. This movement is therefore a translation.

Escalators are designed to help people from one floor to another with greater ease.

When a person climbs aboard an escalator stair, they are moved up or down along a vertical plane. They are also moved along a horizontal plane.

There is no change in the size, shape or orientation of the stairs as they move up or down. This movement is a translation.

Brick walls are an attractive feature in a home or any other building.

The pattern of the bricks is a good example of translation. The patterns are achieved by displacement of bricks horizontally and vertically without changing the size, shape or orientation of the bricks.

7. A plane taking off or landing on a runway

Planes taking off move along a horizontal plane.

They also move along a vertical plane as they begin to lift off into the air. The same movement is seen when the plane is landing.

This movement does not involve a change in orientation, shape or size of the plane.

The plane must maintain its course and orientation to avoid accidents.

When you are standing in one place and walk to another location a few steps away, you are performing a translation as long as you do not turn around.

If you are walking from one end of the room to another along a level floor, the movement is only along the horizontal plane.

If you are walking up the stairs, you will be moving along both vertical and horizontal planes.

9. Bartender sliding a glass across the bar

Bartenders have lots of tricks up their sleeves. These tricks can be quite entertaining to patrons.

One common trick bartenders use in serving drinks is to slide glasses across the bar.

As the glass slides across the bar it is moving along a horizontal plane.

The glass does not change in size, shape or orientation as it slides across the bar.

An item on the conveyor belt moves along a horizontal plane without changing its shape, size or orientation. This is a translation movement.

We encounter translation on a daily basis. Many of the movements we see and experience are examples of translation.

6 Examples of Reflection in Real Life

10 Examples of Rotation in Real Life