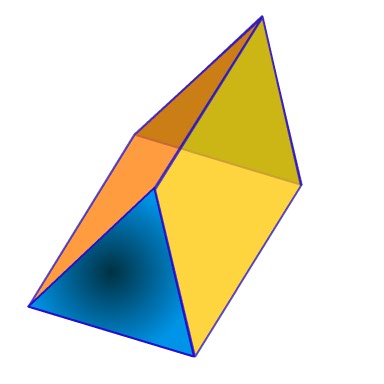 One of the most interesting objects in geometry is prisms.

These are solid objects that have straight-level sides with identical opposite facing ends or bases.

They take many different shapes such as the square prism, rectangular prisms, pyramids, hexagonal prisms, etc.

A common prism that you will often encounter is the triangular prism. It gets its name from the fact that its cross-sections are triangular in shape.

It also has three identical rectangular faces that are parallel to each other. It is these that are used to connect the triangle bases.

In total, a triangular prism has five sides which makes it a pentahedron.

So, you will have to remember the following about a triangular prism:

We can make some important calculations on the triangular prisms such as getting their volume, and surface areas

The volume of a triangular prism is the whole space which is enclosed by the prism. It can be found from the formula:

Volume =Area of triangle base x height of the prism

It is the same as the lateral area added to both triangle bases and base areas.

To find the surface area, use the formula

Formula of Perimeter of base

Many roofs are designed with a triangular prism shape to be able to handle water runoff during rain or storms.

Camping tents which are pitched to the ground and have 2 sloping side ends and its floor have rectangular faces.

The remaining faces on either end are triangular which forms a complete triangular prism shape.

Cheese can also be made in the shape of a triangular prism. This imparts an enticing and inviting look.

Pieces of watermelon can be cut in the shape of a triangular prism. It’s a way to make them have a presentable style and appeal.

Triangular slices of sandwich bread can be shaped in triangular prisms when they are placed together.

These are used in science experiments such as the classic one that produces rainbow colors when white light is passed it.

This is a transparent optic piece of glass. It is designed with accurate angles and flat sides so that it can split white color into its colors and create the spectrum.

An example of this is the Flatiron Building which is situated in New York City is modeled on a triangular prism.

This type of design which uses triangular offers better stability and support. This structure also handles forces better and is able to resist bending.

Honeycombs can get their hexagonal shapes from triangular prisms.

When we have 6 triangular prisms joined up together, they roughly simulate a bee’s honeycomb structure where bees make honey.

The prisms in binoculars use the Porro prism which is an isosceles triangle prism.

The binoculars function as 2 telescopes that allow your eyes to view and see distant objects.

They are useful when you want to sightsee wildlife, bird watching, or neighborhood surveillance.

A periscope is an optical device used for navigation.

It allows you to survey your surroundings while maintaining secrecy or cover.

It is ideal for use in submerged conditions which makes it useful for submarines and sea warfare.

Triangular prisms are a feature of both manmade designs and nature.

They play many functional roles and have also been used as an inspiration for creative decorative work.