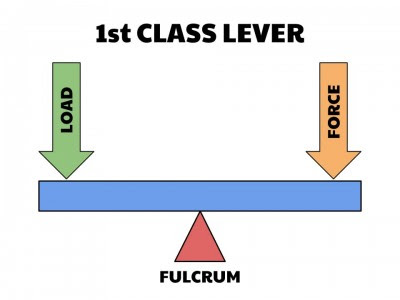 Levers are simple machines that are a part of our everyday lives. The basic structure of a lever consists of a beam that is balanced on a support or fulcrum.

Levers can be grouped into three categories: First class, second class, and third class. The difference between the three classes of levers depends on the position of the force, fulcrum, and load.

In First Class Levers, the fulcrum is positioned in the middle of the beam. The force acts on one side of the beam and the load sits on the other side.

Essentially, the effort is equivalent to the load. That is to say that the force you put into the lever is equal to the output or the force that comes out on the other side.

Here are the most common examples of first class levers:

This is a classic example of a first class lever and one that most people are familiar with.

A seesaw consists of a beam on which two seats are attached at opposite ends.

The beam has a fixed support (fulcrum) at a pivot point.

To move the seesaw one party must push downward with their bodyweight (force). The other party on the opposite end (the load) moves up.

A car jack is used to lift a car in order to access its undercarriage.

A car jack features a rod (beam) on which you apply force. The car is the load and the jack’s body is the fulcrum.

The fulcrum lies between the load (the car) and the force.

A crowbar is a long rod that is often used to lift heavy loads or pry heavy leads open.

The rod (the beam) is placed on a support (the fulcrum) with its tip under the load.

You apply force on the end of the rod to pry open a lid or move a load.

The clawed end of a claw hammer is used to pry open or pull nails out of wood.

The claw fits around the nail (the load). You push down on the hammer’s handle (the beam).

The head of the hammer rests on the surface and acts as a fulcrum. This is an example of two first class levers that are used together.

Shears have two arms (the beams) that are joined in the middle by a pinpoint (the fulcrum).

You apply force to the arms. This causes the opposite ends of the arms to act on the branch or leaves (the load) you’re pruning.

Pliers also feature two arms that are joined by a bolt (the fulcrum). You apply force to the arms to close the teeth of the pliers and grip the load.

The traditional light switch is pushed down on one side to turn it on or off.

When you apply force to push down one side of the switch, the other side comes up.

The effort is carried over the fulcrum in the middle of the switch to the other side.

The two arms of scissors are joined by a pinpoint (fulcrum).

In order to cut anything, force is applied to the arms.

This force is carried over the fulcrum to the blades on the other end of the arms, allowing you to cut an object (the load).

Boat oars are used to propel boats in water.

The oars are long beams with a flat paddle on one side. They are fitted through rings attached to the boat.

When you apply force to the handles of the oars, the force is transferred through the ring supports (the fulcrums) to the paddles which move the water (the load) and propel the boat.

A weighing balance/scale features a beam that is supported in the middle. The beam is fitted with pans at either end.

A load (the item you want to weigh) is placed on one pan. Predetermined weights (the force) are placed in the other pan.

The predetermined weights are added or removed from the pan until balance is achieved.

11. Throwing a ball with your arm

The arm acts as a first class lever when throwing a ball.

The arm is the beam and the elbow is the fulcrum. The triceps applies the force which acts through the elbow to throw the ball (the load).

A hole puncher is a first class lever. The hinge that holds the two arms together is the fulcrum.

Effort is applied to the handles to squeeze them together. The paper in which the holes are punched is the load.

Hand pumps are used to pump water out of deep wells.

In order to pump water out of the well, effort is applied to the long end of the handle.

The handle turns on its support to pull the plunger and water (the load) up.

14. Handle bars of a bicycle

The handlebars of a bicycle are other excellent examples of first class levers.

The handle bar’s support is the fulcrum. When you need to turn the bicycle, you apply force on one side of the handlebars.

The load is on the opposite side of the handlebars.

A steering wheel, for instance, can be considered as a first class lever when you look at its turning motion.

When you want to turn a car, you apply force (effort) to one side of the wheel. The other side or your other hand (the load) is lifted up.

First Class Levers are all around us. They work to give us a mechanical advantage and make work easier.