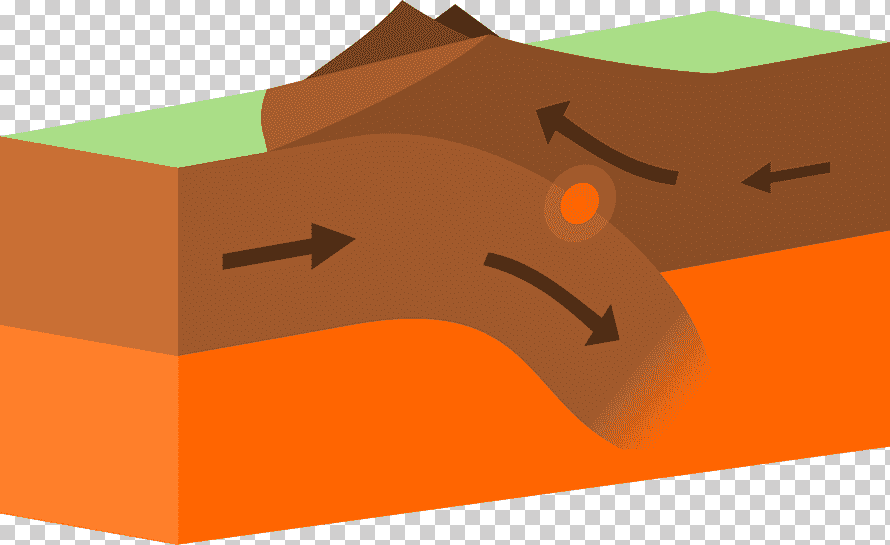 Want a front-row seat to some tension-packed seismic action on earth?

You are likely to get some from a convergent boundary. This is a high activity area that can also literally get too hot to touch!

A convergent boundary marks the area where two tectonic plates collide or meet each other.

As a result of this, dramatic seismic events can follow like earthquakes, volcanic eruptions, or deformation of the crust.

Convergent boundaries are just one of three types of tectonic plate boundaries that can form.

The others are divergent and transform boundaries that are created in a different way.

As the oceanic plate gets pushed into the mantle, it reaches high-temperature areas. For example, depths of about 160 m can cause the material to reach melting temperatures.

The effect of this boundary is that an area of earthquake action is formed. Ocean trenches can also form as well as volcanic eruptions.

Two oceanic plates meet under the ocean crust. e.g., a lithospheric mantle and an oceanic crust.

Out of the two, the older or colder plate will be denser. So, it is pushed down or subducted beneath the other plate which is warmer and younger.

The sunken plate gets heated in the mantle causing it to melt. The effects of this boundary are the formation of an oceanic trench and an area where earthquakes occur with increasing depth.

This type of boundary is not as well understood as the others. It occurs when two continental plates collide with each other.

Typically, no subduction takes place as both plates are less dense than the mantle.

As a result of this boundary, intense faulting and folding can occur. Mountain ranges can also form as well as earthquake action.

This is the most famous boundary because it’s the most active seismic area in the world.

About 450 volcanoes occur here which is 75% of all of the volcanoes on earth.

It has a length of about 40,000 kilometers. Its boundaries border other plates such s the Philippine, North American, Nazca, Indian-Australian, Cocos, Juan de Fuca, and Pacific plates.

This boundary is a continent-continent convergent boundary.

The Indian plate still maintains its movement northward at 67 mm each year.

The Alps are some of the most majestic mountains around. It features sedimentary rocks which is evidence that it originally emerged from the sea.

They formed from the African and Eurasian tectonic plates colliding together.

Since the African plate was denser, it was subducted under leaving the lighter continental crust above it.

An interesting feature of the Alps is the Matterhorn which has rock materials from both the Eurasian plate and African plate but in different places.

These mountain ranges are located in South America. They formed from the collision of the Nazca and South America plates.

This was an ocean-continent boundary in which the oceanic plate was subducted under the continental plate.

The ranges lie in a subduction zone making them very unusual since these are high mountains.

This is an ocean-ocean boundary in which the South American plate meets the Caribbean plate.

Since the South American plate is much colder than the Caribbean plate, it is denser.

This makes it descend or get subducted under the Caribbean Plate.

One of the features of this boundary is the Caribbean Islands, giving a 90,000 square miles area that includes the Bahamas islands.

Boundaries may restrict or confine. But convergent boundaries are of a different order.

They unbound and unloose the imprisoned contents of the earth’s tombs to give us a magnificent display of geological formations.