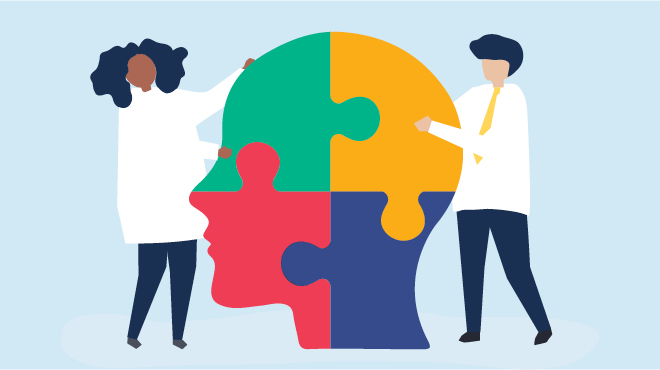 How do we learn or make sense of the complex world around us?

Jean Piaget suggested that this happens through a process in psychology called accommodation.

From his studies of child cognitive development, Piaget concluded that in accommodation, we make use of mental shortcuts called schemas.

Schemas are mental pictures that simplify how we view the world. They can be objects, persons, roles, or events.

To organize them, we use two processes: assimilation and accommodation.

How Assimilation and Accommodation work

Learning is the process where assimilation adds new information to the schema without much change to them.

For example, if a schema stands for a bear, we could add newly learned information such as its size, the fact that it hibernates, or its favorite habitat.

Accommodation is a much more complex process. Instead of simply adding new information as assimilation does, it modifies what is already there.

For example, a child may picture feathers or birds when he thinks about flying things. However, when he sees a plane that also flies, he has to accommodate his thinking to fit a new schema for planes.

Assimilation occurs when what we previously thought we knew, is contradicted by reality. This forces us to adjust our previous knowledge to reflect the new information.

Accommodation helps our schema to become more refined and detailed as a result of experience or new information.

Even though Piaget made these observations on children, it applies to everyone including adults.

Here are 5 examples of accommodation in psychology.

People can have stereotyped schema about other social groups such as races. For example, a child may have been raised to think that colored people are inferior.

However, after interacting with them, he discovers that they are equals with other races.

This forces the boy to change his mind.

The first-time children see death it can be deeply confusing. It challenges a lot of preconceived notions they had about life.

Previously they may have taken for granted that life is a continuous journey with no end.

To come to terms with this new information, they have to accommodate their thinking and readjust the schema in their minds.

Most of us have a hard time conceiving of infinity even as adults. However, we have come to conceptually accept it as a possibility after reflection or training.

Before this, we may have been adamant that no such thing exists. This is an example of accommodation from our previous knowledge.

Faced with realities such as decimal numbers with an infinite number of decimal places or the possibility of endless space, we have adjusted our thoughts to accommodate this information.

For a long period in history, the vast majority of the common people believed that the world was flat.

Only among the few learned elites such as the Greek philosophers (Pythagoras, Aristotle) and later, seafarers or navigators like Christopher Columbus, did some believe otherwise.

Today with undeniable pictures of a round earth, few people hold to the beliefs.

However, they are still some who are flat Earth believers. Should they be confronted with irrefutable evidence, they would also have to undergo an accommodation in their thoughts.

Members of a religious cult can show unusual devotion. These members usually come under the influence of charismatic leaders such as the late David Koresh or Jim Jones or the more recent QAnon phenomenon.

After being indoctrinated, they become strongly convinced of the leader’s teachings and are even prepared to sacrifice everything for the cause.

Many of the devotees are intelligent people who appear to be just like normal everyday people.

However, when the leader’s predictions or apocalyptic prophecies don’t come true, the follower may be forced to rethink their beliefs.

This makes them completely change their beliefs causing them to leave the cult and even to condemn it.

There comes a time when a seemingly good idea has to give way to a better idea.

Accommodation seems to sum this up very well by paving the way for new knowledge.