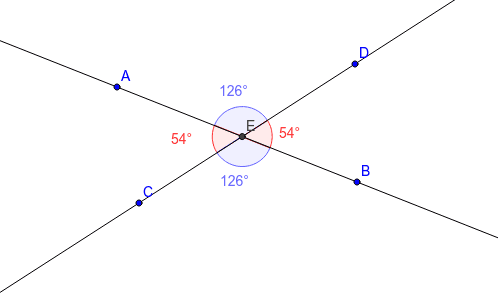 You will also notice that the two opposite angles are equal. The two intersecting lines form two pairs of vertical angles.

Vertical angles are a pair of angles that are formed by two intersecting lines. These angles:

Vertical angles are applied to many areas in real life. We see and experience these angles in our daily lives.

This is one of the first things many people think about when they picture intersecting lines in real life.

Their outline is that of two straight lines that intersect to form two pairs of vertical angles.

Crossroads are points where two roads intersect. They are basically two straight lines that intersect at a point (the crossroads junction).

There are two pairs of vertical angles formed by the intersecting roads. The opposite angles of the crossroads junction are equal and non-adjacent.

Do you love playing darts? Take some time to really examine the dartboard the next time you go to play darts.

Dartboards are circular with straight lines running from one edge through the center to the other edge.

These lines intersect at the center of the board (the bull’s eye). The intersecting lines form angles that lie on opposite sides of the vertex.

The opposite angles are equal and non-adjacent. There are 10 pairs of these vertical angles on a standard dartboard.

A pair of scissors is an instrument that is hard to miss in any household.

It consists of two arms. These arms intersect at the pivot. When the scissors is open, the two arms become intersecting lines. The pivot becomes the vertex.

The letter X is made up of two straight lines that intersect at the center.

The letter X, therefore, forms two pairs of vertical angles with the center of the X as the vertex for all the angles.

The opposite angles about the center of the letter X are equal and non-adjacent.

This is true for the letter X in both its uppercase and lowercase forms.

Kids love to play with kites especially on windy days when they can be flown high.

Kites today come in a wide variety of shapes and sizes. However, many people think of the classic quadrilateral or diamond shape when the word kite is mentioned.

This classic kite shape consists of two intersecting sticks that form the frame of the kite structure.

The sticks are arranged to form a cross. These intersecting sticks form two pairs of vertical angles at their point of intersection.

The opposite angles about the point of intersection are equal and non-adjacent.

Ceiling fans are used to push cold air down and increase the circulation of air to keep a space cool.

Ceiling fans feature blades that radiate from a central motor.

If you were to draw a line from the tip of one blade to tip of the opposite blade, you would form intersecting lines that run through the central motor.

These lines form angles at the point of intersection i.e. the central motor. The angles opposite each other are equal and non-adjacent. They are vertical angles.

It’s evident that vertical angles are much more than a geometrical concept.

These angles have found many applications in our daily lives.