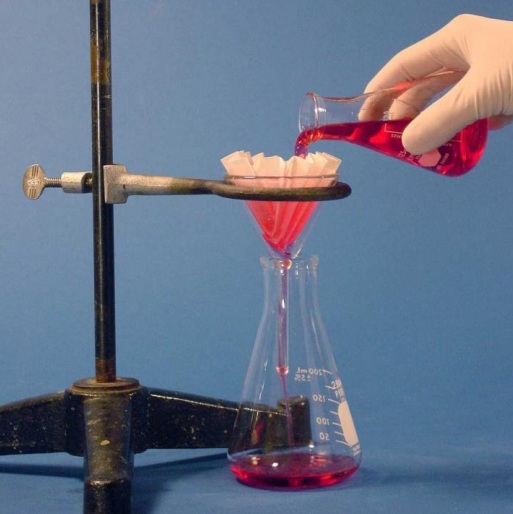 Most of the substances we use in our daily life are mixtures.

Crude oil is a mixture of different components such as petrol, kerosene, bitumen, gasoline, diesel, and gaseous alkanes.

By definition, a mixture is a substance made up of two or more components that are not chemically combined.

The components of a mixture retain their chemical properties and are separated by physical means.

There are two categories of mixtures:

The method used to separate a mixture depends on the type of mixture and the properties of the mixture’s components. If an element in the mixture is magnetic, a magnet is a suitable method for separation.

The particles of the mixture’s components are of different sizes.The mixture is passed through a filter or a sieve where the fluid particles pass through, leaving the solid particles on the sieve.

The solid particles on the sieve form the residue, while the liquid part that flows through is the filtrate.

Here are examples of mixtures that can be separated by filtration:

1. Separation of sodium bicarbonate and ammonium chloride in the Solvay process

The reaction in the Solvay tower yields ammonium chloride and sodium bicarbonate.

The solid-liquid mixture is separated by filtration, where sodium bicarbonate remains on the filter as the residue while ammonium chloride is the filtrate.

2. Purification of water for domestic use

Water is passed through gravel during treatment to remove soil sediments.

The solid sediments are trapped in the gravel as clean water is filtered through.

3. Separation of sodium chloride and sand

If you accidentally mixed sand and sodium chloride, you can separate them by filtration.

Sodium chloride dissolves in water while sand does not.

Suppose you add water to the mixture and stir before filtering. Sand will remain on the sieve as the residue.

The solution is then evaporated to obtain sodium chloride as the residue.

4. Removal of dust from the air

Dust particles are removed from the air by passing them through filters.

The dust-free air passes through the filters.

5. Separation of tea leaves from tea

When preparing a cup of tea, tea leaves are added to hot water.

The residue is filtered and remains on the sieve while the flavored tea flows out.

Fuels become impaired and less efficient if they have impurities. Fortunately, impurities in fuel can be removed by filtration.

Fuel filters are used to remove contaminants from contaminated fuel.

The fuel filter is put between the fuel inlet and the fuel tank. As fuel flows through the filters, rust and dirt are absorbed by the filters.

Your car engine may get damaged if you use contaminated oil. The impurities clog on the machine leaving it impaired.

Oil filters are connected to the oil gallery and the engine’s base.

When oil flows through the filters, impurities are removed by filtration.

A sieve is placed at the pump oil intake in cases with no oil filters.

8. Removal of waste products from the blood in the kidney nephron

Waste products such as glucose, ions, and fluids are removed from the blood by the kidney nephron through glomerular filtration.

They are mixed with nitrogen waste to form urine.

Filtration is a simple method of separating mixtures but has a lot of applications.

You do not need special equipment to do filtration or any special skills.