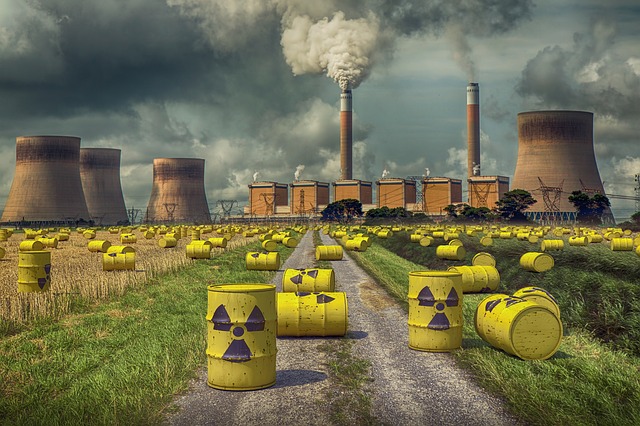 Protons and neutrons, also known as nucleons, are found in the nucleus of an atom. They are made up of smaller particles known as quarks.

Quarks exist in flavors: up and down. A proton has two up quarks and one down quark, while a neutron has one up quark and two down quarks.

Atoms with a neutron-proton ratio of above 1.6:1 are unstable. This imbalance weakens the binding energy of the strong nuclear forces.

An unstable atom will try to attain stability by losing nucleons (protons and neutrons) or releasing energy in other forms.

When a neutron decays, a proton, electron, or neutrino is released. This type of reaction is called nuclear fission.

When light nuclei at a high velocity collide, they combine to form one heavy nucleus. This type of nuclear reaction is called nuclear fusion.

A typical example of nuclear fusion is the reaction between deuterium and tritium.

Weak nuclear force initiates the reaction between deuterium and tritium, which supply energy in the sun.

The weak nuclear force is the force that causes radioactive decay in atoms. The force travels within a short distance—less than the length of a proton hence the name ‘weak interaction.’

Here are examples of weak nuclear force in our daily life.

Heat energy in the sun is produced from the reaction between tritium and deuterium.

The weak nuclear force allows particles to transmute and form new particles. This reaction is essential in modifying particles to obtain the desired characteristics.

The muon is an example of a particle that transmutes to an electron and two neutrinos. The force also transmutes protons to neutrons and neutrinos.

It is possible to identify up and down quirks through their weak interactions. Identifying the quirks helps scientists in the analysis of the proton.

5. Determining the age of archeological materials

Archeologists can determine the age of fossils through carbon dating. Carbon -14 decays to nitrogen-14 through weak nuclear force. The amount of carbon -14 present in a fossil is used to estimate the age of the fossils.

6. Gauging the thickness of metal and paper sheets

The beta particles have high penetrating power and can pass through a thin sheet of paper or metal. This property of the beta particle helps gauge the thickness of metal and paper sheets.

The explosives exert pressure on nuclear material, causing fission. When fission occurs, massive energy is released. This reaction creates a high temperature and pressure resulting in the ignition.

Phosphorus -32 is a radioactive isotope. It has more neutrons than protons (17). The most stable isotope of phosphorus has 16 neutrons while phosphorus -32 has 17. The high number of neutrons makes it unstable.

Among the four fundamental forces that keep the universe running, the weak nuclear force is the most significant.

David Armstrong, an American researcher, says that weak force controls life. Indeed it does. Light and heat from the sun are essential for life on earth. Humans, animals, and plants require sunlight to grow. Physical and chemical processes in our lives depend on energy from the sun.

Without weak force, the sun will lack energy, and life will freeze.