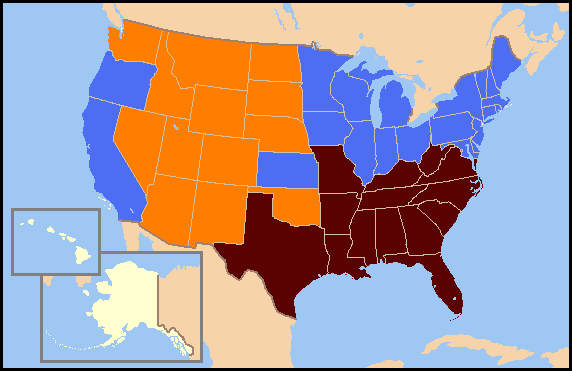 It gives them a way of differentiating different areas of the world to aid their analysis.

Geographers also need to choose how to define those regions.

Formal region is just one way of doing it. It uses homogeneity of an area as its criterion.

By using one or more homogeneous characteristics that are shared by its population or geography, geographers can define a formal region.

What is a Formal Region?

A formal region denotes an area that is defined by a universal or common characteristic.

Its boundaries are usually well defined.

The characteristic that defines it is usually restricted to those boundaries.

These boundaries are also termed official boundaries to denote that they are set up by the authorities or governments. Therefore, they are not disputed by any party.

Formal regions can also be called homogeneous or uniform regions to reflect the commonness of an attribute found in them.

Cities, towns, counties are formal regions that stand in contrast to vernacular regions whose boundaries can be debatable among different people.

One of the easiest ways of recognizing a formal region is by looking at countries. These tend to have certain universal characteristics that define them.

One of these is a political boundary that marks it out as a nation or state.

Another is if it has a commonly spoken language that helps to distinguish it from neighboring areas.

Some formal regions can also be demarcated by geographical features such as the Himalayas mountains which mark the borders of some countries like Nepal and Bhutan.

Examples of Formal Regions in the US

A good example of formal areas in the US is the 50 states composing it. Each of them is a formal region since they have distinct boundaries and other characteristics as discussed below:

Texas is a formal region since it’s a state with administrative or political boundaries. It is the second-biggest state in the US.

In the US electoral map, Texans also stand out for being a red state, or a strongly Republican-voting state.

In contrast to neighboring states lacking this consistency, Texas has always voted Republican since 1980.

Texas also features some distinctive geographical features such as the Red River which marks the boundary between it and Oklahoma to the north.

Texas also has the largest production of cattle which has given it the cowboy image.

It consists of an archipelago of islands that have a separate physical existence from the US mainland.

This distinguishes it as a formal region since it is the only state that consists only of islands.

Also, unlike other states, it shares no borders with any other state.

Apart from English, the Hawaiian language is widely spoken as its official language.

This makes it a formal region; it’s the only area where the language is an official language in the US or anywhere else.

It has boundaries as a state which makes it a formal region.

Its climate is also very sunny giving it the name Sunshine State.

Florida also has unique geographical features to mark it such as it is a peninsula surrounded by water on all its sides except the north.

This gives it 3 coastlines. It’s also the southernmost part of the US.

Another defining feature is its high alligator numbers and also unusual weather that makes it lead in the number of hurricanes and tornadoes.

Is North America a formal region?

Yes, North America is a formal region since it’s a continent consisting of 23 countries.

This designation gives it a clear-cut boundary which makes it a formal region.

However, others consider North America as a subcontinent of America or the Americas.

Is Africa a formal region?

Due to its status as a continent, Africa can be considered a formal region.

Its continental boundaries are clearly defined and there is universal agreement about them.

Africa is also a unique spot that gives it a central location on the globe.

Both the prime meridians of longitude and latitude lines cross it. Since the equator crosses it almost in the middle, it has year-round direct sunlight which makes it the hottest continent. These climatic and physical attributes define it as a formal region.

The commonly perceived image of Africans as black-skinned cannot be used as a characteristic to define it as a formal region. This is because large parts of Africa like northern Africa are populated by Arabs.

Is Canada a formal region?

Yes, Canada is a formal region. This follows from the fact that it has political boundaries that are internationally recognized by all.

However, Canada sometimes experiences contests from its Quebec province. Occasionally, some of its members have expressed aspirations to be sovereign and separate from Canada.

Quebec is a French-speaking province which makes it distinct from the rest of Canada which speaks English.

If Quebec is excluded from Canada, then we would have to use different borders to define Canada as a formal region.

However, for the moment, Quebec is viewed as part of Canada, especially following two referendums in which Quebecers voted to remain part of Canada.

Is Japan a formal region?

Japan is a formal region for various reasons. It is a distinct political unit with boundaries that are not in doubt.

It also consists of islands which gives it a unique geographical description. This can be used to define it as a formal region.

Japan is also distinct from its surroundings due to its peculiar culture.

The predominantly spoken language among its population is the Japanese language. This defines Japan as a formal region since outside its borders Japanese is rarely spoken.

The country is also located near four tectonic plates giving it a higher record of earthquakes than most countries.

Is Mexico a formal region?

Mexico is a formal region since it is a sovereign state with clearly recognized political boundaries.

Its Spanish language also defines it since it’s the official language with 90% of its population speaking it. This distinguishes it especially against the mainly English-speaking US which neighbors it to the north.

Its geographical feature of being very mountainous also defines it as a formal region since it has the highest average elevation in North America of 1,110 meters.

It has 3 mountain ranges in western, eastern, and southern.

Another criterion for it to be a formal region is its climate. Since the Tropic of Cancer runs through it, it has a warm and tropical climate throughout the year.

The Rio Bravo River (Rio Grande) is a geographical feature that marks part of its boundary with the US.

Another geographical feature defining it is its 2 peninsulas: the Yucatan peninsula and Baja California.

Formal regions are typically too generalized because the attribute used to define them is not always universal in the region.

For example, you can use the electoral map to define the District of Columbia as Democratic voting.

A central assumption for the definition of a formal region is that its borders are not in dispute.

However, formal regions are not entirely without some disputes. For example, Italy and Austria were briefly locked in a territorial dispute.

This was after the mummified remains of a 5,000-year-old human (Otzi the iceman) was found by some tourists in an area between the two countries.

Although this case was finally resolved, other examples continue to simmer continuously.

For example, China frequently disputes Taiwan as part of its territory even though most of the world does not.