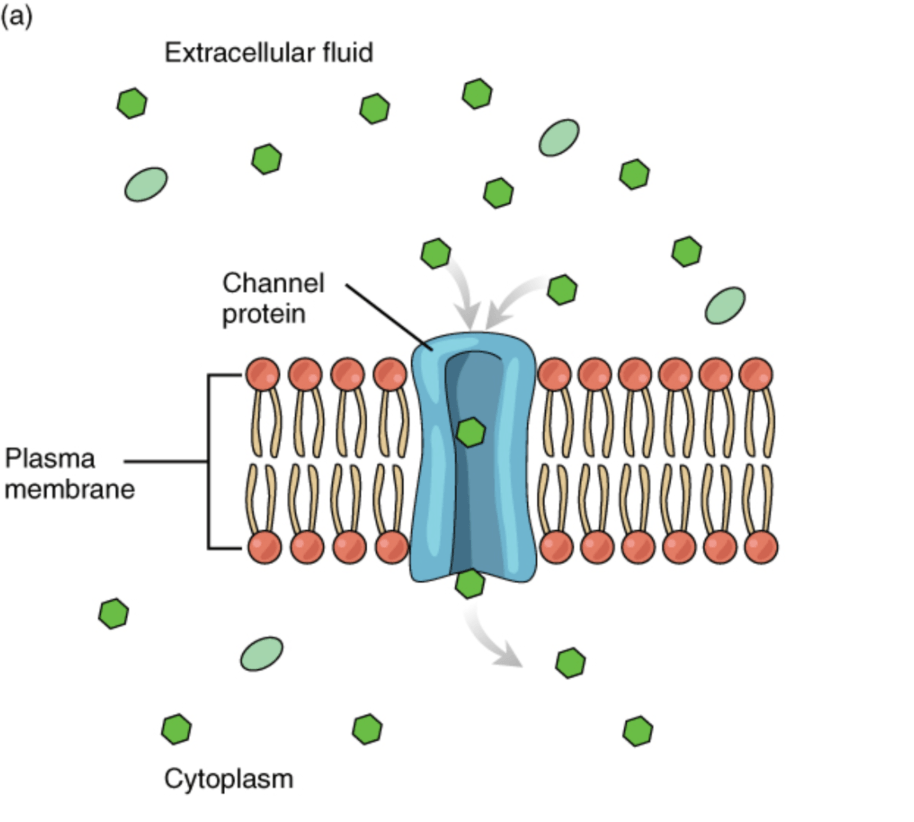 A cell is like a busy factory that needs input supplies to come in and waste thrown out.

Like a factory with a wall, windows, doors, chimneys, ventilators, etc. acting like inlets and outlets to the outside, the cell has a semi-permeable membrane.

This selectively allows some things in or out thus maintaining the best conditions possible for internal operations and needs.

But this neat arrangement doesn’t always work so well which puts the cell in danger.

For example, most membranes have a hard time admitting hydrophilic (water-loving molecules) even though they are essential for life.

In simple diffusion, things can freely move back and forth across membranes on their own depending on the concentration gradient.

Cells can rely on this process but up to a point. For some transport needs simple diffusion would be either too slow or ineffective.

This is where facilitated diffusion kicks into gear. It’s a type of passive transport where the cell gives help for transporting substances from high to low concentration areas through the semipermeable membrane.

It is a version of simple diffusion but with enhanced features!

Cell membranes are designed with a phospholipid bilayer that makes the interior hydrophobic (water-fearing) and the exterior (water-loving).

Because of this structure, molecules easily pass the lipid layer, if they are:

These can freely diffuse in and out of the cell.  However, the membrane doesn’t permit the following:

So, how does the facilitated diffusion get these substances to enter? The answer is protein transporters!

There are 2 types of protein transporter that are used in facilitated diffusion. These are:

Channels produce openings or pores in the membrane which admit charged molecules. These are of 2 types: open and gated channels.

Open channels never close. Gated channels can close and shut, which plays a regulating role. The action is stimulated by signals or stimuli.

These are embedded in the membrane. They work by changing their shapes and then binding on the substances they want to transport.

This enables them to carry them through the membrane to the other side where they release them.

After this, their shapes revert back so that they are ready to transport another molecule

We can compare transport proteins to enzymes because each protein type is specific and will only transport a specific molecule.

Remember that both simple diffusion and facilitated diffusion are passive transport methods.

So, unlike other transport methods like active transport, they do not need energy. However, the difference between simple diffusion and facilitated diffusion is that the latter is assisted unlike the former.

Here are 10 examples of facilitated diffusion in real life.

1. Getting water into your cells

As living things, we desperately need water to survive. But how does it actually get into cells where it is required?

Normally the water would enter cell membranes through simple diffusion.

However, by facilitated diffusion, the body can use special proteins called aquaporins to speed up this water passage.

Aquaporins are proteins that form pores through which water and small solutes can be transported faster. They are found in bacteria, plants, and animals.

Each aquaporin molecule features a pore at its center.

The reason water or molecules need help to pass through is that they carry a small electrical charge. This makes it hard for them to enter or exit a cell.

Aquaporins provide a very specific favorable environment for water passage. They do this by their size and charge inside the channel.

Glucose is a substance that our bodies continuously need due to our cells for energy.

The blood continuously supplies it to cells where it is required for cellular metabolism.

Despite the high concentrations of glucose in the blood compared to inside the cell, it cannot pass through by simple diffusion. This is due to its large size.

Also, glucose does not dissolve easily in the phospholipid bilayer of the membrane. This makes the transport of glucose by simple diffusion slow.

For example, GLUT 1 carries glucose into the red blood cells and cells of the skeletal muscle and brain.

GLUT 2 carries glucose into the cells of the liver, kidneys, pancreas, and intestines.

We wouldn’t be alive long if amino acids couldn’t enter our cells. They are essential for a long list of functions including the synthesis of proteins that are a lifeline for life.

However, amino acids are bulky, so they cannot rely on simple diffusion to enter or exit a cell. For this, they rely on carrier proteins.

This role is fulfilled by amino acid transporters which are permanently integrated in the cell membrane.

For example, organelles (like the lysosomes) which also feature membranes similar to cell membranes rely on amino acid permeases to transport amino acids to the cell’s cytoplasm.

4. Getting oxygen into our blood cells

We breathe in the much-needed oxygen but how is it transported from the blood into the cells where it is needed?

This is achieved by hemoglobin, a molecule that resides in the red blood cell surface.

Oxygen has a high affinity (attraction) to hemoglobin.

So, the hemoglobin protein carrier can fulfill the oxygen transport into the cell by facilitated diffusion.

The hemoglobin increases the speed at which the oxygen diffuses so that it is much faster than simple diffusion.

For your muscles to work properly, they need oxygen. For that, we need special gas carriers, which is the carrier protein myoglobin.

Myoglobin is quite similar in function to hemoglobin. Both are pigments that bind to blood.

Myoglobin however is used to supply oxygen to muscle tissue. It is used in facilitated diffusion to transport oxygen.

Myoglobin allows you to flex your muscles for a longer time without tiring easily.

Sea creatures such as seals are rich in myoglobin in their muscles.

Sodium ions are essential in nerves or brain cells, so you won’t want to starve your body of them!

They are tiny molecules and would easily pass through the cell membrane.

However, the hydrophobic interior of the cell membrane won’t admit sodium ions because it will repel them.

So, facilitated diffusion provides sodium channels for passage. The channel opens only when charges change outside or inside the cell.

People left in open spaces can freely walk about and spread.

In a closed space, however, such as in a room, movement is hindered.

When fire breaks out in the room, people panic and want to leave at once but exiting is hard due to the crowd.

The escape door is usually too crowded. However, if emergency doors are provided, people can have a quicker route for escape.

VIP motorcades are a common sight when leaders are traveling.

Sometimes a prominent leader or VIP wants to use a public road to reach a destination.

But the roads can be busy and his motorcade risks getting held up by traffic.

Anticipating this, motorcycle outriders and other chase cars precede the leader’s cars.

The goal is to clear the way ahead of the leader’s motorcade so that it can pass easily.

The outriders can be compared to the role played by proteins transporters which clear the way for molecules to enter the membrane.

If you have ever tried to thread a needle through its eye, you know how frustrating it can be.

The end of the thread often can’t enter the eye despite your best aim or efforts.

That’s because it has an irregular shape or frazzled ends that don’t fit well to the eye.

As you try to push it in, it keeps moving in different directions.

A common trick used is to smoothen the thread end with a lick or by straightening it out with a few small twists with your finger.

This is like the action of a protein carrier that changes shape to carry a molecule through the cell membrane.

Counselors, diplomats, or reconcilers may need to work hard or skillfully to reconcile estranged friends, couples, or enemies.

Often the parties are not in speaking terms even if they are in the same room.

By defusing the conflict, he is like a protein transporter facilitating the entry of ions that cannot enter due to the repulsion from the hydrophobic part of the cell membrane.

The task of controlling what goes in and out of the cell is like a smooth-running concert.

But even the best-planned concert can go wrong, getting the audience annoyed.

Protein transporters are the characters who stand in just in time to avoid embarrassment.

And with that, the concert in the cell can go on and we the audience can enjoy the show!