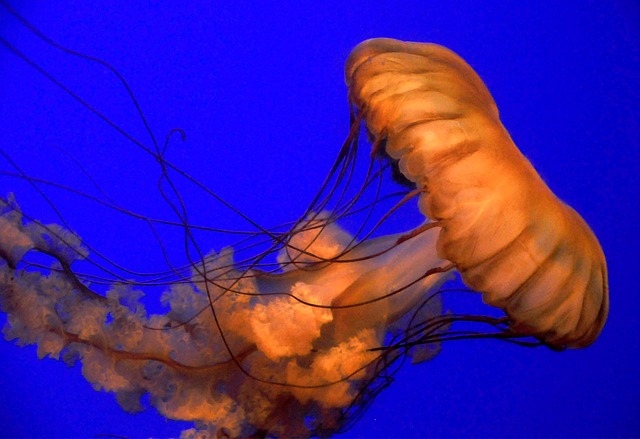 In biology, symmetry is a basic feature that is observed in many living things.

Basically, this is a type of order that is shown in the arrangement of body parts of the organism.

However, not all living things have symmetry.

Living things lacking symmetry are called asymmetrical to distinguish them from symmetrical organisms.

When it comes to symmetry, you can pick from 3 basic forms: spherical, radial, or bilateral.

These fascinating creatures are best known for the awful sting they give when you step on them.

Classified under the phylum Cnidaria, they consist of all types of organisms from corals, jellyfish, sea anemones or gorgonians.

In radial symmetry, the animal’s body has a circular shape. For these shapes, you can’t have a left or right side!

However, the best we can do is to consider that it has two surfaces: a bottom and a top.

You can understand radial symmetry by imagining a pie or a wheel.

When you cut a pie along its middle, you get two halves that are basically mirror images of one another.

Radial symmetries have a central axis which is an imaginary line that divides the body shape into two halves that are roughly identical.

Typically, animals with radial symmetry have radiating parts such as multiple arms.

However, not all multiple-armed animals have radial symmetry.

The octopus, for example, which has eight arms has bilateral and not radial symmetry.

This is because you can only use one plane to produce identical duplicate halves by dividing them through their central axis.

Cnidarians can be classified as:

Other Unique Features of Radial Symmetry

Cnidarians have only one opening which functions as both a mouth and an anus!

Biologists believe that this radial symmetry served to contrast cnidarians from animals that evolved before them.

In terms of complexity, cnidarians lie between sponges and bilaterians which constitute most other animals.

Cnidarians have no nervous system but only have a nerve net.

Thinking about cnidarians as having physical ends can be difficult! For example, they don’t have heads, tails, etc.

So, the only way to imagine their ends is through the relative position or distance from their mouths.

Through this, we can distinguish between two ends which are the furthest point from the mouth and the nearest.

Radial symmetry gives animals certain advantages not possible for other shapes. An animal has more flexibility to access food from any direction.

Jellyfish, for instance, can sense both food and danger without being hindered by direction.

Compared with other types of symmetries, radial symmetry is the rarest which makes cnidarians very unique among organisms.

Cnidarian shares this feature of radial symmetry with another phylum echinoderms as well as flowers which feature petals.

Such animals usually move by floating such as jellyfish or are very slow-moving.

This can be contrasted with bilateral symmetry which suits streamlined bodies for locomotion.