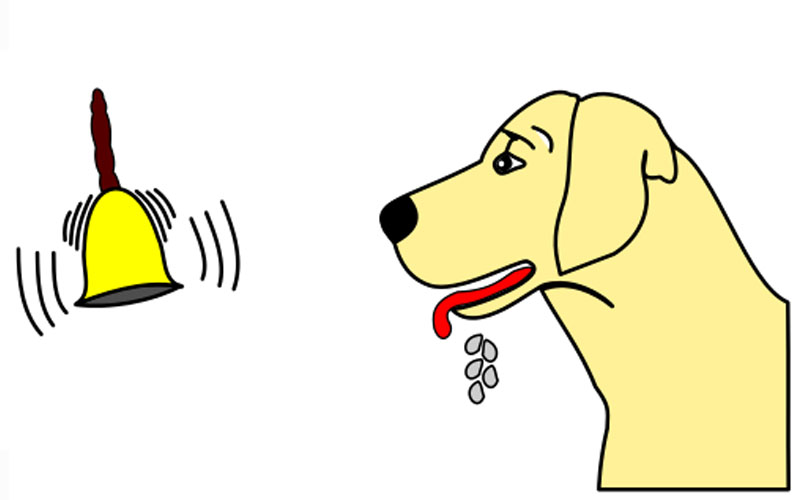 Learning is all around us. It’s a prerequisite for survival in a tough environment, whether you are a human or an animal.

Associative learning is a kind of learning that subjects undergo in their environment. It’s where subjects make associations or links between two things that were not associated with each other before.

To do this, subjects take elements in the environment called stimuli (e.g., sounds, smells, objects, colors, etc.) and begin to pair them with a certain behavior or response (salivation, fear, positivity etc)

How this actually takes place depends on whether the learning is classical conditioning or operant conditioning.

Operant conditioning and classical learning are both types of associative learning. They are each based on conditioning which comes from interacting with elements in the environment.

Classical conditioning or learning is where one learns to relate a stimulus with a certain response.

The most famous case of classical conditioning was demonstrated by Pavlov, a Russian physiologist.

Pavlov experimented with dogs by conditioning them with food. Initially, the dogs salivated (unconditioned response) at the sight of meat (unconditioned stimulus).

This was an unlearned response because it happened naturally without the need for the dogs being taught.

Pavlov then introduced a neutral stimulus (a bell ring) before giving the food.

A bell ring is a neutral stimulus because it is not naturally connected with food.

After repeatedly doing this, the dogs began salivating at the sound of the bell itself even without seeing the food.

The dog had learned to associate the bell ring (the neutral stimulus that has now turned into the conditioned stimulus) with the food.

Their salivation at the bell ring had become a conditioned response.

Related Post: 12 Examples of Classical Conditioning in the Classroom

Through it, a subject begins to associate a behavior with a consequence (reward or punishment).

1. Aversion to a food

Have you ever been put off by food because of a particular bad experience you had with it?

For example, if you happened to eat caviar and got an allergic reaction you are not likely not to eat caviar again. This is regardless of whether the caviar was really responsible for your situation or not.

Later you may even get the same revulsion when you see an item connected with the caviar such as the bowl or the restaurant.

This is an example of associative learning because you have learned to associate the caviar (conditioned stimulus) with a negative response.

Do you feel differently depending on which day of the week it is?

This could be because you have been conditioned to associate each day with positivity or negativity.

For example, Mondays are associated with depression hence the term blue Monday, Fridays elicit excitement because we look forward to relaxing during the weekend.

It’s also probably the day you get a paycheck.

3. Stingrays crowding around humans at sea

One of the most intriguing cases of associative learning happened with stingrays, a sea animal related to sharks.

Scuba divers who arrived at sea on motorboats had a habit of feeding the animals with squid (unconditioned stimulus).

Therefore, the stingrays flocked to eat the food.

When this was done over a long time, the stingrays began flocking at the just the sound of the motorboat engines.

They had learned to associate the engine sounds with food

Have you noticed that most car ads feature attractive female models next to the car?

These kinds of ads are mostly targeted at men.

Studies have shown that such ads are better received by men who perceive the cars to have superior design and speed.

Associative learning takes place because men associate something desirable (models) with the car.

5. Cancellation of ads with celebrities involved in scandal

Sharon Stone lost an endorsement deal with Christian Dior when she suggested that a lethal earthquake in China was deserved “karma” for China mistreating Tibet (a politically charged sentiment).

Bill Cosby lost endorsements for several brands after sex allegations were made against him.

These are examples of brands turning against figures they had previously used as positive associative learning for their customers.

When parents come back home from work, it’s not unusual for little kids to be over the moon to see them.

If a parent always honks at the gate, the kids learn to associate the honk (stimulus) with the parent’s arrival.

So, they automatically get excited at the sound of the honk even though they haven’t seen the parent.

If you feed chicken with corn on a continuous basis, the chickens adopt a new pattern of behavior.

Previously, before you started feeding them, they would not respond to your presence.

After feeding them a few times, they flock towards you whenever they see you because they are expecting to get food.

This effect can be also produced by clicking. The chickens learned to associate you or your clicking with the food.

Have you ever played the paper rustling trick with kids?

They get all excited with their ears perked up when they hear the sound.

Wrappers for biscuits, crackers, or crisps typically produce these sounds when you open them.

So, the kids expect a treat. This shows associative learning where the kids associate the rustling sounds with their favorite food

Students are more likely to ask questions next time if teachers praise them for doing so.

This is an example of operant conditioning where a reward (praise) leads to more of the action.

This technique can be used for shy students to encourage them speak up in class.

On the other hand, admonishing them (e.g., for wrong answers) leads to discouraging them from speaking.

Making people laugh in public can be tension-packed as you don’t know the reception you will get especially if your jokes fall flat.

If you are applauded, this will inspire you to continue.

If you get boos, you may quit your career or try to change your jokes.

But as we have seen in the case of celebrity disasters, it can also wash off and the perfume goes away!