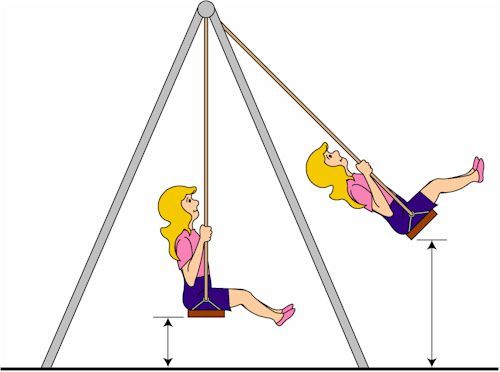 Kinetic energy sounds like a complex concept. However, it is actually quite simple.

Energy is the force that an object applies. It is the ability or capacity to do work.

Kinetic energy can be defined as the energy possessed by an object that is moving.

The object is said to have kinetic energy because it is in motion.

When it stops moving, the object will no longer have kinetic energy. It will instead have what is known as potential energy.

The formula for calculating kinetic energy is Ek = ½ mv2. Where m is mass and v is velocity.

Here are some great kinetic energy examples at home:

1. Walking around the home

When you need to get from one room to another in the house, you get up and walk.

When we walk, we are creating kinetic energy. Our bodies (a mass, m) are moved forward at a certain speed (v).

Kinetic energy is also produced as we walk and rotate various parts of our bodies such as the arms and legs.

A ceiling fan is used to circulate air in a room and keep the temperature comfortable on a hot day.

The moving blades of the fan are an example of kinetic energy.

The fan’s blades are transferring kinetic energy to the air around them and causing the air to move.

3. A glass dropping to the floor

When a glass is sitting on a table, it is said to have potential energy. This is the energy that all objects at rest have.

When the glass falls off the table and breaks, the potential energy is converted to kinetic energy.

The glass (a mass) moves at a certain velocity as it drops to the floor. This kinetic energy is what causes the glass to break.

Water in a faucet has potential energy as it is at rest.

When you turn on the faucet, the potential energy is converted into kinetic energy as it pours.

The kinetic energy of the water as it moves across the surface of dirty dishes pushes bits of food along with it to leave the dishes clean.

5. Rotation of the blades in a blender

A smoothie is a great way to enjoy your fruit and vegetables.

The blades in a blender have potential energy when at rest.

The motor of the blender rotates the blades. The blades gain kinetic energy as they rotate.

This kinetic energy causes the blades to slice through fruits and vegetables resulting in a smoothie.

6. A flyswatter swatting a fly

Flyswatters can be very handy especially when there are lots of bugs flying about.

The kinetic energy produces a force that smashes the bug.

A ball has potential energy when it is at rest.

When the ball begins to roll, the potential energy is converted into kinetic energy.

The ball is a mass that moves at a given speed. If there are objects in the path of the ball, the kinetic energy of the ball will cause the ball to knock over these objects.

When you place your clothes in the washing machine and turn it on, the drum spins.

The drum moving at faster velocity results in increased kinetic energy which in turn causes the dirt to become lose.

When you place bread in a toaster, you move the handle down which compresses a spring in the toaster.

The kinetic energy is transferred and forces the bread up.

10. Typing on a keyboard

We use computers in our homes when working from home, doing homework, or searching for information online.

A keyboard allows us to communicate with the computer. Typing involves pressing keys on a keyboard.

This sends a signal to the computer which it interprets to carry out a task.

Kinetic energy is energy that is present in any moving object. It is everywhere around us.

We encounter it in every object that is moving around us.

Can you think of more examples of kinetic energy in your home?