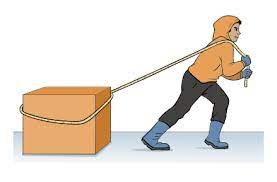 When it comes to forces, you can pick from two flavors:  contact forces or non-contact forces. All forces either belong to one or the other.

By their names, we already have a clue of what they are—contact forces need you to be in direct physical contact with an object for them to act.

Contact forces are the commonest type of force that acts in our environment, especially on objects larger than the atomic or subatomic world.

For example, when you kick a ball or swing a bat, you are exerting a contact force. This requires you to touch or hold the object so that you can exert force.

In all these situations, no physical contact is needed as the objects interact through fields that are set up in space.

Also termed as action at a distance, these forces are invisible, unlike contact forces that can be seen.

Here are 10 examples of contact forces that you may meet in real life.

This type of contact force experiences a reaction force or normal force.

These forces act on any object that is at rest. For example, the book on the table exerts a downward force due to its weight.

This is countered by an equal but opposite force exerted by the surface of the table.

Since the forces are equal, they cancel out causing the book to remain at rest.

The force is a contact force since the two surfaces touch each other.

Other examples include you lying in bed, furniture standing on the floor, or dinner plates on a table.

2. A lamp hanging from a roof by a cable

Cables, wires, ropes, or strings transmit a tension force when they are pulled tight by two forces pulling in opposite directions.

This is a contact force since the two pulling forces have to be in physical contact with each end of the cable or rope.

Examples include a lamp hanging from the roof by a cable, a person dropping from a helicopter by a harness, a water pail being drawn from a well with a rope, or a rope used to tether an animal.

Other examples include the action of cords used by bungee jumpers.

3. A plane flying in the air

A plane flying in the air encounters air resistance. This is a special type of frictional force.

It is due to the interaction between its body surface and the air molecules.

As it flies, the air tries to slow down the plane. The plane has to maintain a forward thrust to overcome the resistance and maintain its speed.

Other examples of air resistance include birds flying in the sky or a feather falling slowly from the sky.

When you push a box across the floor, it slides and experiences a contact force called sliding friction.

This is due to the resistance of the two surfaces of the box and the floor which makes the box slow down.

Another example is when you slam your car brakes and cause it to skid to a halt.

A sliding frictional force acts on the tires due to its contact with the tarmac road.

5. An insect walking on water surface

An insect experiences a contact force called surface tension when it walks on water.

This happens because when a liquid surface is in contact with another surface (solid or liquid), it acts as an elastic sheet by minimizing its surface area.

This makes it possible for tiny insects to walk on the surface.

Other examples of surface tension include floating needles on water

6. Pliers pressing on a nut

When you hold and press a nut with pliers it exerts a compressional force.

The force is a contact force since the nut and the pair of pliers are in direct physical contact.

Compressional forces are forces acting in a direction towards each other. This causes an object to deform in shape or break.

Another example is when a crocodile’s jaws grasp its prey. As it closes its teeth, it compresses its prey causing its bones to crush to pieces or its flesh to deform.

What causes ducks or geese to float majestically on water?

The short answer is: buoyancy forces. When ducks swim on the water, they are kept afloat by a contact force called buoyancy or upthrust.

This is the action of the water pushing upward against the weight of the duck.

The duck floats because its weight is either equal to or less than the upthrust.

If this weight were to exceed the upthrust, the duck would sink.

Ducks have features like air sacs and hollow bones to make them lighter.

Other examples of buoyancy forces include boats or ships.

Ships or boats are made with a hollow interior which makes their entire bodies have a lower overall density compared to water. This causes them to float.

8. Pushing against a wall

When you push or pull on an object with your hand, you are applying muscular force.

This happens because of exerting the energy from your muscles.

To do it, you need to have physical contact with an object.

An example is when you push on a wall or cupboard. Another example of muscular force is running where your legs push against the ground to produce forward motion to your body.

When you push a cart, you are exerting an applied force.

These kinds of forces act when you push or pull on an object causing them to move or get deformed.

The objects will move in the direction of the applied force. For example, if you push a cart forward, it moves forwards.

Elastic objects like rubber bands or coiled springs have mechanical energy stored in them. This can produce contact forces called spring forces when it is stretched and then released.

The springs revert to their original shape.

For example, valves springs in car engines help to securely close the valves and protect pistons, axles, and bearings by providing the right amount of compression force.

The water sprinklers used to water your garden also uses springs attached to the swing arms which make them rotate.

With contact forces, one can heave a sigh of relief as these seem less mystic with less incriminating evidence of spookiness.

That’s because everything seems certain about who is in contact with who!