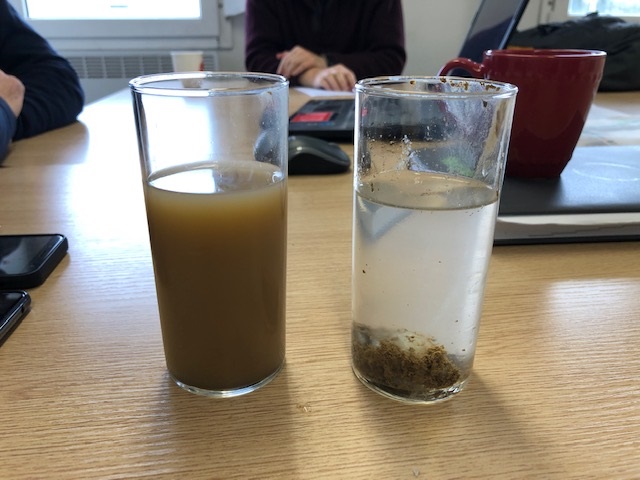 There’s nothing better than a hot cup of chocolate on a cold day to warm the body up.

If you want to make a quick cup of hot chocolate, you’ll probably start out by mixing a spoonful of your favorite hot chocolate powder into hot water.

Before you add anything else to it, take some time to observe it. If you’re patient enough to let it sit for a while, you will notice that the cocoa particles begin to settle at the bottom of the cup. This is because cocoa is a suspension mixture.

A suspension is a mixture in which the particles (solutes) do not dissolve into the medium in which they are dispersed (solvent).

When a suspension is allowed to stand for a while, the particles will settle out of the medium.

Suspensions are heterogeneous meaning that the particles do not get evenly dispersed in the medium.

The particles in a suspension are large enough (larger than 1000 nanometers), so gravity is able to pull them down—out of the dispersion medium.

Properties of a Suspension

The following are some examples of suspensions we encounter in real life.

Have you ever jumped into a puddle of water on a rainy day?

If the water was clear, it will become murky as a result of soil particles mixing with the water.

The particles of soil do not dissolve in the water though.

If you leave the puddle of water to stand for a while, the particles of soil will settle out of the water.

Muddy water is therefore a suspension.

We often mix flour with water when preparing pastries.

If you’re preparing a light pastry such as pancakes or crepes, you will mix the flour with a lot of water to form a thick liquid mixture.

If you allow this mixture to stand, the flour will settle to the bottom of the container.

This is because the flour particles do not dissolve in the water.

So, flour in water is a suspension mixture.

Suspensions can also occur with a gaseous dispersion medium. Dust is an example of a gaseous suspension.

The particles of dust are lifted into the air and remain scattered in the air as long as there is wind or another form of propulsion.

However, they do not dissolve in the air. The dust eventually settles out of the air.

Lime (calcium hydroxide) is used in the construction industry to plaster walls. It is also used in cement and mortars.

It is mixed with water to form a thick paste. However, slaked lime particles do not dissolve in water.

If the mixture of lime and water were allowed to stand for a while, you will notice that the lime particles settle to the bottom of the container.

Slacked lime in water is therefore an example of a suspension.

Soot consists of particles of carbon that are the result of incomplete combustion.

When these carbon particles are released into the air, they form soot.

The particles eventually settle out of the air and onto surfaces forming a black film of soot.

This is the blackening that is seen on fireplaces, chimneys, car exhaust pipes, and other surfaces.

Whole blood is considered a suspension mixture. This is because it contains blood cells and other particles such as platelets which do not dissolve in the liquid medium (the plasma).

Blood cells and platelets can settle out of the plasma when the blood is allowed to stand for a while.

Laboratory technicians use centrifugal forces to speed up the rate of settling of these particles when running blood tests.

Watercolor paints are a heterogeneous mixture.

The pigment and binder do not dissolve in the water.

When you mix the watercolor paint with water and allow it to stand, you will notice that the pigment and binder settle to the bottom. This is therefore a suspension mixture.

There are many medicinal drugs that are administered in suspension form. These include antiparasitic drugs such as metronidazole and antacid medications such as magnesium hydroxide.

These suspensions consist of particles suspended in a medium such as a saline solution.

The particles do not dissolve in the solution. However, the liquid medium makes them more readily available to the body.

We encounter these mixtures in our daily lives. They can be identified by allowing the mixture to stand for a while and observing to see if the particles settle out of the medium.

Can you identify more suspension mixture examples that you come across in your daily to day life?