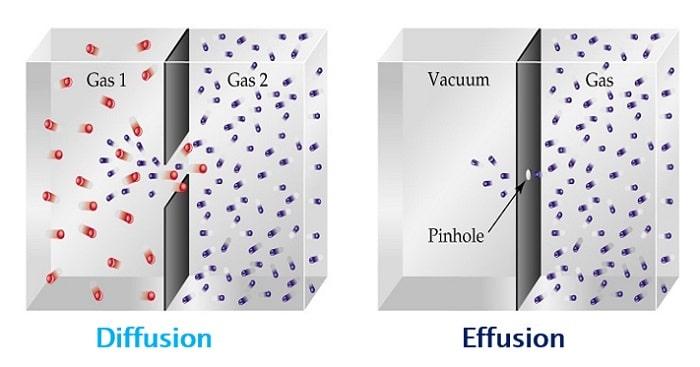 As stipulated in the kinetic molecular theory, solids, liquids, and gases are made up of tiny particles in constant motion.

Solids and liquids are in condensed states wherein their particles are close together, thus limiting their range of movement.

Gaseous molecules can cover hundreds of meters and experience billions of molecular collisions every second.

Therefore, at room temperature, gaseous molecules will maintain random motions but in the direction of the space’s concentration gradient.

The particles will move from areas of high concentration to those of low concentration until equilibrium is reached, allowing for effusion or diffusion.

Diffusion is the movement of atoms or molecules across a concentration gradient.

In contrast, effusion occurs when gaseous molecules move across a concentration gradient, albeit through a tiny opening or a semi-permeable surface with a diameter smaller than the molecule’s mean free path.

The primary distinction between these two concepts is the path used by gaseous particles to disperse across a concentration gradient.

In diffusion, molecules and atoms move in an open space free of barriers.

Conversely, in effusion, particles move through an orifice that is significantly tinier than the typical free path.

Despite their stark difference, diffusion and effusion are two sides of the same coin.

They are similar in terms of gradient, particle mass, and kinetic energy. In particular, both processes happen down a concentration gradient.

Additionally, their occurrence rates increase with an increase in kinetic energy and reduce with a reduction in particle mass.

Examples of Effusion in Real Life

For effusion to occur, gaseous particles need to move across a concentration gradient by means of a small opening.

This process usually happens after a gaseous substance is enclosed in a high concentration space and is gradually dispersed into an evacuated area by passing through a tiny hole.

There are several real-life examples of this scientific concept, namely:

The cylinder contains a high-pressure space that is filled to the brim with concentrated LPG.

Once a user turns on the gas cooker or heater, the cylinder’s small pore opens up, paving the way for LPG particles to effuse from a high to low concentration through the hole.

Inflated balloons usually deflate gradually over time. This is a direct consequence of gaseous effusion.

Once inflated and sealed, balloons leave very tiny apertures at the end where it is tied.

It is through this space that the gas particles escape the balloon’s interior and enter the less concentrated atmospheric space.

Similarly, gaseous molecules find their way into the atmosphere after a balloon is poked due to effusion.

The particles move across the concentration gradient through the poked surface.

The balloon is also likely to pop when prickled with a sharp object as its rubber surface will give in to the tension, forcing it to pull away.

It is not uncommon for tires to lose air over time, eventually turning flat. This is particularly true for vehicles that have not been driven for a while.

The gradual deterioration occurs as a result of gaseous effusion.

Pinhole tire leaks are largely to blame as air slowly effuses into the atmosphere through these tiny holes.

In most cases, it is almost impossible to identify these pinholes with the naked eye.

A viable remedy, however, is to apply soapy water to the tire’s surface. This way, bubbles will form around the pinhole, thus signifying effusion.

It is fully fitted with metal tantalum heating filaments, a pyrolytic crucible, an orifice shutter, and a water cooler.

The solid to be tested is first heated to ensure it produces ample vapor pressure inside the cell’s isothermal space.

It is then deposited into the cell’s enclosure and pressure is applied using the movable plunger.

This pressure causes the heated solid to produce vapor, which gradually effuses through the tiny orifice at the bottom of the cell.

Vapor pressure is determined by calculating the total solid mass lost during sublimation.

The majority of glass cooking ware have a tiny hole strategically placed next to the lid’s handle.

This aperture is a safety feature designed to allow steam to escape the pan or dish during cooking, protecting the glass lid from cracking due to excess heat.

What’s more, this hole also makes cooking a more enjoyable process as it allows the food’s aroma to spread out.

People in different rooms can smell the aromatic tang even when the lid covers the cookware.

Ideally, the gaseous aroma is effused from a region of high concentration (inside the pan or dish) into the surrounding atmosphere through the tiny hole on the cookware’s lid.

However, once effused through the tiny hole, these gas particles diffuse through the open space until they reach people in other rooms.

Effusion is also the underlying process that makes it possible for people to apply body spray.

Sweet-scented aerosol is packed into a spray can and an actuator is fitted to control the gas’s dispensation.

The valve opens once the actuator is pressed down, allowing the pressurized propellant to escape from the container through the valve’s minute opening.

Once released into the atmosphere, the high fragrance gaseous molecules diffuse in the air, enabling people to smell the spray.

It is a similar case for air fresheners as they release the gaseous fragrance through effusion.

Gaseous molecules escape the can through effusion as they pass into the small open valve and find their way into the targeted open space.

Notably, people are able to smell the air freshener once it is released due to diffusion.

Also known as a catalytic lamp or perfume lamp, this apparatus is used to disperse vaporized scented alcohol used to purify room air.

It has a catalytic combustion wick that is ignited for 2-4 minutes before blowing it out.

Given its catalytic combustion ability, the wick continues to produce flameless heat for several hours, which is used to vaporize the scented alcohol and oil mixture inside the lamp.

The disinfectant vapor then undergoes effusion as it passes through tiny holes in the diffuser cap (crown).

This vapor then diffuses into the surrounding air and integrates with room air to undertake catalytic oxidation to kill off bacteria.

Ever since the Cold War, HEU (highly enriched uranium) has been a fundamental proponent of scientific research and warfare domains.

It is used in the manufacture of research reactors and nuclear weapons.

To produce this substance, manufacturers enrich uranium by separating the U-238 and U-235 isotopes.

This separation process is only possible through effusion.

First, solid uranium is turned to uranium hexafluoride gas (UF6) by reacting it with heated fluorine.

UF6 is then placed in an isotopic chamber fitted with a semi-permeable membrane.

Given that U-238 is denser than U-235, the latter effuses quicker through the porous surface, creating an ideal HUE compound.

Pleural effusion is an archetypal example of liquid effusion. This is a condition whereby the pleura is filled with excess fluids, thereby disrupting the functional vacuum that facilitates lung expansion during breathing.

The excess fluid makes its way from the highly concentrated parietal pleural capillaries into the low concentration pleura through the capillaries’ semipermeable membrane.

This is a form of effusion since the excessive fluid passes through the microscopic capillary holes down a concentration gradient.

In summary, effusion is the process through which gas or liquid particles pass through a tiny hole as they escape from a highly concentrated enclosure to a lesser concentrated area.

This process is a consequence of constant kinetic motion of particles.

However, due to their condensed state, liquid particles are less active than air particles, making the latter more capable of effusion.

On the other hand, pleural effusion is a good case in point for liquid effusion.