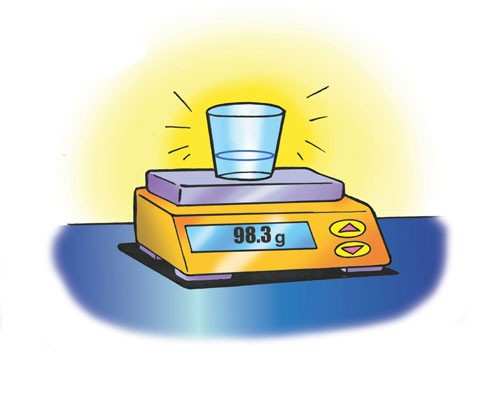 It doesn’t matter how different the form of matter looks after the reaction; this fact will always hold.

This phenomenon is known as the law of conservation of mass. Another way of saying this is that matter can’t be created or destroyed.

It is a universal law that holds everywhere. For example, the total mass in the universe is constant since you cannot add new matter to it or destroy any to subtract from it.

However, a few things need to be said for the law to be true. The reactions should be a closed or isolated system.

The reactions take place without interacting with the outside environment. This ensures your starting materials and finishing products after the reaction is the only things you consider.

For example, if we burn any material, we are performing a chemical reaction. If you take the soot, gases, and ashes and weigh them, you will get exactly what the total mass was for the substance you started with. This shows that mass is conserved.

The law of conservation of mass is usually used to describe chemical changes.

Chemical reactions are those between molecules or atoms. However, if we also consider nuclear reactions (reactions between nuclei or subatomic particles, then we have to take account of energy changes as well.

This means the total amount of mass and energy in the universe remains unchanged.

You can’t add or subtract from it. However, in chemistry, we retain the law of conservation of mass because the conversion of matter into energy in chemical reactions is minute.

Here are 10 examples of conservation of mass in real life.

In campsites, it’s popular for people to start fires using wood for cooking or warming themselves.

What makes the fire burn is the carbon in the wood which acts as fuel.

When the fuel burns using oxygen, it reacts according to the chemical equation which can be written as:

If we started with 12 grams of carbon and 32 grams of oxygen, it would produce 44 g of carbon dioxide.

Therefore, mass is conserved because the mass is the same both before and after the reaction.

However, note that this is an open system (not a closed system), so if we devised a way of isolating the system completely, it would give the results that agree with the conservation of mass.

The brewing process for beer shows that mass is conserved.

The starting ingredients are malt, grains, water, sugar, and hops.

When these are processed and converted into beer, the products are alcohol, water, flavoring materials, and carbonation.

The total mass of the ingredients and products are the same, proving the mass conservation.

Through it, plants take carbon dioxide from the air and water to make their food (glucose).

This process can be written in the following way:

The combined mass of the carbon dioxide and water compared with the products (glucose and oxygen) are the same showing that you can’t create matter or destroy it.

The disinfectant that you keep in your medicine cabinet for treating emergency minor cuts is most likely a bottle of hydrogen peroxide.

To protect your disinfectant from becoming ineffective, it should be kept in a dark place away from light.

Otherwise, it undergoes a decomposition reaction like the one below:

This is where you combine two simple elements to come up with the combined compound.

An example of this is the formation of water by combining hydrogen and oxygen.

This kind of reaction conserves mass because if you add up the mass of hydrogen and oxygen, it equals the mass of the water formed.

Have you wondered where your candle goes when it grows smaller or is consumed?

When you light a candle, the paraffin wax in it burns, acting like fuel in a combustion reaction.

If the entire candle burns, it turns into water and carbon dioxide as the products of the combustion. This can be written as:

Mass is conserved because the total mass of the candle wax and oxygen used to burn it is the same as the mass of the water and carbon dioxide released.

7. The vinegar and baking soda experiment

A common experiment which is done by students to prove the conservation of mass is to react vinegar with baking soda.

The products produced are carbon dioxide, water, and sodium acetate.

Since the reaction produces gas that can escape, a balloon is used to capture it.

When we weigh the baking soda and vinegar used and the products, we find that their masses are the same thus confirming the conservation of mass.

In this equation, everything on the left side when summed up equals the result on the right-hand side.

According to mathematical rules, the equal sign implies balance or equality.

In the same way, conservation of mass in a chemical reaction shows equality or balance in the masses of the substances on the left-hand side and the right-hand side.

The conservation of mass can be used to find or solve for missing masses.

For example, if we react methane gas (CH₄) with oxygen, we get carbon dioxide and water as the products as shown.

If we already know that the mass of carbon dioxide is 44g, we can get the mass of the water by applying the conservation of mass principle.

Conservation of mass helps to balance out chemical equations.

By simply counting the number of atoms, we can ensure.

Atom counts: Before reactions      After reaction

Since there are more H and Cl atoms on the right than on the left this violates mass conservation.

Therefore, we correct for this by the following:

How complete is the reign of the law of conservation of mass?

Well, the domination of the law is total, even beyond death! If we die, our parts will still do justice to the law by being recycled to other forms to ensure the law is conserved.