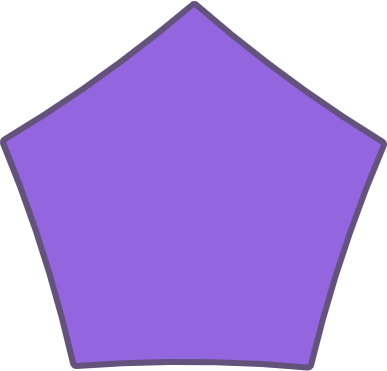 We come across pentagons every day. Take a close look at a house. The outline of the house when viewed from the side has five sides and five angles. This makes it a pentagon.

Pentagons are shapes with five angles and five straight sides. Penta is a prefix that means five. Gon is a suffix that means angles. When the two terms are put together, they refer to the five angles within a polygon.

Pentagons are a type of polygon. Polygons are shapes that have many angles. Poly is a prefix that means many.

Polygons have many straight lines that enclose the shape and therefore form many angles. If the sides were not straight or if any side was open, then it would not be a polygon.

You probably encounter pentagons in your daily life. However, do you ever take the time to appreciate these shapes?

Here are some fun pentagon shape facts about you probably didn’t know.

2. All pentagons must have straight sides though the sides aren’t always the same length

In order for a shape to be considered a pentagon, it must have five straight sides. However, these sides don’t have to be of equal length.

Sides may be of different lengths or some sides may be the same length. However, no side should be left open as this would not be considered a pentagon.

A pentagon whose sides and angles are not equal is known as an irregular pentagon.

4. Pentagons can be concave

Pentagons are considered to be concave when one internal angle measures more than 180 degrees. This causes two sides of the pentagon to cave or sink in and form a concave shape.

5. Pentagons can be convex

Pentagons are considered to be convex when all the interior angles are less than 180 degrees. These are simple pentagons. They are the pentagons that many people are familiar with.

6. The measurements for interior and exterior angles in a regular pentagon are always the same

7. The sum of all interior angles in a pentagon is 540 degrees

8. Pentagons can be cyclic

Cyclic pentagons are those pentagons in which a circle known as a circumcircle can go through all five vertices.

A circumcircle is a circumscribed circle. It passes through the vertices of a polygon. Polygons are known as cyclic polygons when the circle can touch all vertices.

9. Pentagons have an apothem

An apothem is a line segment that can be drawn from the center of a polygon to one of its sides.

These lines are perpendicular to the side of the polygon with which they meet. The apothem of a regular pentagon can be used to calculate its area.

10. Regular pentagons are made up of 5 congruent isosceles triangles

Regular pentagons can be divided using diagonal lines. This results in 5 isosceles triangles. These triangles are congruent. This means that they are the same size and shape.

11. Regular pentagons are made up of 10 congruent right isosceles triangles

If you extended an apothem from the center of a pentagon to each side of a pentagon, you would form 10 congruent right-angled isosceles triangles.

12. You can find a total of 35 triangles within a regular pentagon

If you were to draw lines within a pentagon joining different vertices, you would create a combination of triangles of different sizes.

You will find a total of 35 equilateral, isosceles, scalene, obtuse, acute, and right-angled triangles.

Pentagons are a polygon that we encounter every day. However, not many of us take the time to consider the many wonders that this shape holds.

As you can see from the above pentagon shape facts, there is a lot more to the pentagon than you may have thought.