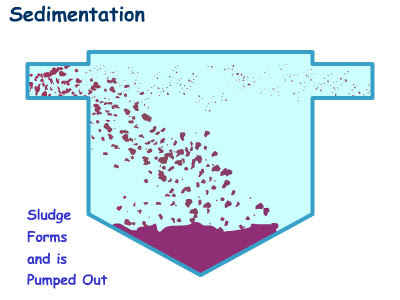 Whenever you enjoy that coveted cup of tea, you should thank the process of sedimentation for the pleasure.

The swirling of tea leaves which finally settle down to the bottom of the cup gives you that special flavor.

While this may be a minor event like a storm in a teacup, the same process also takes place across wide areas of the earth’s surface with far more drastic results.

Sedimentation occurs when particles (also called sediments) come to rest at the bottom of lakes or other water bodies after being transported over some distance.

The particles come from erosion which breaks down rock into sediments or smaller particles.

Some of the most imposing geological features come from sedimentation. This includes desert dunes, alluvial fans, and river deltas.

Sediments can carry imprints from the past, recording for us past events that shaped the earth’s surface.

Let’s look at 6 examples of sedimentation in real life:

Sedimentary rocks such as limestone, shale, and sandstone can contain fossil remains of ancient creatures as part of their material.

These animals or plants which died many years ago are preserved in the sedimentary rocks as organic material.

When these animals died, they were quickly buried before they could be eaten by scavengers.

Materials like mud, sand, or minerals covered the remains of living things.

Over time, they accumulated and became compacted. Due to the hardening of the rock over time, the animal became lithified (turning into rock), while retaining the original shape of the animals.

Dinosaur fossils are one of the best examples of fossilization that occurs due to the sedimentation of rocks.

Many exciting sites have been recovered from archeological digs after scouring through layers of sediments.

For example, the city of Pompei was a Roman city that was buried up to 6 meters in volcanic ash after Mount Vesuvius erupted in 70 AD.

Excavations later uncovered many lifelike bodies of people who had died from the excessive heat and suffocation.

The ash acted as sediments because it settled after the volcanic eruption to cover the city.

The human remains and artifacts were preserved by pumice, a volcanic rock that formed when the volcanic lava rapidly solidified.

Deltas and river banks have sedimentary soils which farmers recognize as very fertile for agriculture.

They teem with biodiversity and tend to gather rich nutrients as a result of sedimentation.

For example, the banks of the River Nile features black silt which is a thick rich type of mud.

It is great for farming and was responsible for the prosperity of one of the world’s oldest civilizations—the Pharaonic Egyptian civilization that is famed for its pyramids.

The river flows northward from its source in Burundi through several countries before flowing into Egypt and draining into the Mediterranean Sea.

It carries rich nutritious sediments for thousands of miles before finally depositing them in the Egyptian Nile banks.

Sedimentation of minerals can also occur where heavy minerals are left behind.

Some of these are highly valued deposits. Examples are gold, platinum, chromite, magnetite, and copper deposits.

Other minerals like gypsum, carbonate, potassium salts also form sediments from water evaporation or precipitation which leave behind ionic chemical compounds (evaporites) that are electrically charged.

These give rise to clastic sediments.  For example, the table salt we rely so much on for seasoning food comes from halite which is a chemical sedimentary rock.

When circular (centripetal) force is applied to mixtures containing different substances, they tend to separate according to density.

Heavier particles move further from the centrifugal axis while lighter ones stay closer. This causes the separation of the mixtures.

For example, you can separate chalk from water using centrifuge sedimentation.

Another example is skimmed milk where the fat is separated from milk. This leaves a type of milk that has less amount of dissolved fat.

In this medical procedure, a person’s blood is collected in a test tube to test how quickly the red blood cells settle.

Different components of the blood have different sedimentation rates.

As a result, red blood cells will separate from plasma after some time, settling at the bottom.

Red blood cells usually settle slowly. If they settle too fast, this shows that a patient may be having inflammation, which is an immune system response.

Doctors use this result to diagnose an injury or infection to which the immune system is reacting.

It may also point to an immune disorder or chronic disease.

Sedimentation gets a rocky start when weathering and erosion smash rocks into sediments and washes them away—but it’s all for the crater good!

When these sediments hit rock bottom in river beds, we are able to piece up a story that leaves no stone unturned.

Thanks to sedimentation, secrets of the Earth’s tumultuous past can be laid bare.