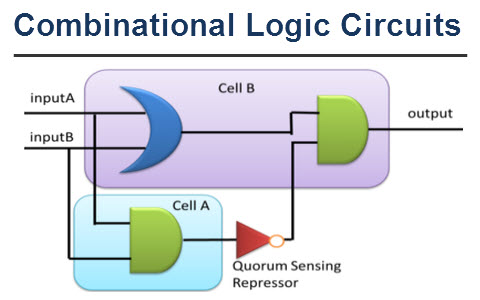 We rely on machines and devices to carry out various tasks in our day-to-day lives.

These machines and devices feature electronic circuits that enable them to carry out the tasks they are designed to.

Combination logic circuits are just one type of circuit that is featured in many devices and machines that we use daily.

As their name suggests, combination logic circuits consist of a combination of various gates to form a circuit.

The output of this type of circuit is dependent on the logical function (or combination) of the current input i.e. logic ‘1’ or logic ‘0’.

The output is only dependent on the input at a given instant in time as the circuit has no form of memory.

Therefore, outputs will not reflect inputs given in the past. There is also no feedback loop or timing in these types of circuits.

1. Buzzer Or Beeping Feature In A Car

When a driver or passenger gets into a car and sits down, they are required to buckle their seat belts.

If the driver or passenger fails to do so, the car beeping or buzzer feature begins to beep.

The input, in this case, is the seat belt being unbuckled. The output is the annoying beeping.

The beeping does not go away until the belt is buckled.

This beeping is set off every time there is a driver or passenger in the car seat when the car is on and their seat belt is unbuckled.

In its simplest form, a car alarm system consists of a main switch, a motion or vibration or door sensor, and an alarm.

The main switch and the sensors in this case are the inputs. The alarm is the output.

As long as the car does not sense movement and the door remains locked, the alarm will remain off.

The alarm will also go off if the door is opened while the main switch is on.

Thermostats are installed in hot water tanks to prevent overheating.

Here are two contacts (x and y) located near the top of the hot water tank. These contacts are normally covered with water.

The water acts as a conductor that keeps the contacts connected.

These systems are designed to keep plants watered and prevent them from drying out.

A basic automatic watering system will include contacts that are buried in the soil.

The relay closes when the soil is too dry and when it is nighttime.

These two conditions are the inputs required to turn on the pump.

These locks are designed to be opened depending on the combination in which the buttons are pressed.

For example, in order to open a door, one must press both buttons A and B at the same time.

If the person pressed button A and then presses button B, the door will remain locked. The doorbell will instead sound.

For example, a safety measure may include temperature, volume, and pressure monitoring.

All these parameters must be optimized for safe production.

A change in any of the parameters will result in the safety mechanism being activated. The production line may shut down or an alarm may go off to alert a worker.

Combination logic circuits are the fundamental components of microprocessors.

They are used in processors to interpret binary signals into logical operations.

There you have it; 7 examples of combinational logic circuits in real life.

As you can see, combination logic circuits are an important part of our daily life.

They are a feature in many of the machines and devices we rely on for our daily tasks.