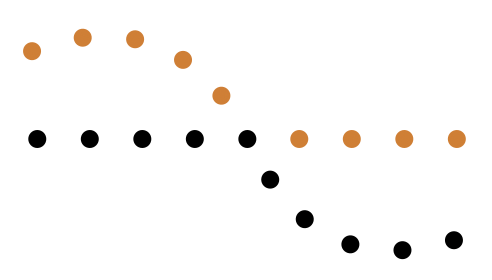 How do our visual senses organize stimuli and make meaning of our complex world?

A group of German psychologists in the early 20th century introduced the principle of continuity which tries to explain how vision is used to perceive and process elements in our surroundings.

Continuity is the idea that people view stimuli (i.e., objects) as smooth instead of being discontinuous or discrete.

It is one of the 5 principles that form part of the Gestalt Principles of Perception which also include similarity, proximity, closure, and figure-ground.

Gestalt principles suggest that human perception focuses on the whole rather than the components, based on the concept that the whole differs from the sum of the parts.

The principle of continuity (also known as good continuation) is a theory about our minds and senses.

According to the theory, we tend to see smooth continuous lines even when the lines are jagged or broken.

The principle says that those elements that are more aligned are seen as more related together as opposed to those that are not aligned.

Therefore, we perceive lines to generally maintain their established paths even when they crisscross with others.

Here are 8 examples of continuity that we see in everyday life.

The Amazon logo features an arrow linking the ‘a’ to ‘z’ letters that appear in its name. This depicts the continuity principle that helps us to perceive the whole alphabet as starting from ‘a’ to ‘z’.

When looking at the logo, our eyes will follow the line and connect the two letters. This achieves the logo’s intent which is to communicate completeness rather than smaller components

TV or video images are made up of millions of particles that move across the screen as a result of the bombardment of the screen by electrons.

They produce motion on television screens which are actually a series of rapid individual events that take place in a sequence.

However, we don’t see these rapid separations between individual sensory events—which would be rather confusing.

Instead, our brain sees smooth and continuous images which are in the form of motion, agreeing with the continuity principle.

The human brain has a unique way of recognizing faces.

Even though neurons function in groups to recognize specific details in the face, we tend to look at the face as a whole when identifying faces.

Single facial details looked at in isolation such as a mustache, a pair of cheeks, lips, or eyebrows are very hard to use for identification.

However, when all the details are considered together, we can instantly recognize faces that are familiar to us.

This agrees with the continuity principle where we perceive objects as complete wholes instead of the parts.

Routes depicted on Google Maps are used to indicate paths to follow for reaching various destinations given the starting points. They may be represented as a disjointed line.

However, in line with continuity principles, we tend to see the whole line as an integrated line with no partitions in it.

Music is made up of several individual notes that are combined together to form a complete piece.

However, our brains perceive music as a smooth and continuous unit without focusing on individual notes.

Therefore, our enjoyment of music is based on perceiving the whole form of the musical piece

6.  Speed Markings on a Speedometer

A speedometer has increments on it that have a circular or linear alignment.

Since the markings or increments have the same alignment, they are perceived by the eye as belonging together.

Our eyes see the elements as related together in terms of the continuity principle.

When we look at lines drawn on roads, our eyes see the continuous flow of the visual elements instead of objects that are separated.

Therefore, drivers or pedestrians are able to follow the lines even if they are broken or interrupted.

Our eyes tend to fill in the spaces so that we perceive it as a smooth continuous line in agreement with continuity principles.

Have you felt a little confused when looking at a large group of zebras huddled together in a herd?

The lines of their skins can create an illusion of one big mass of zebras. Their stripes blend together and make it hard to distinguish between individual zebras.

This is the effect of camouflage.

Zebras use this to confuse predators making it difficult to target any particular zebra.

The continuous principle is illustrated in the way stripes in one zebra merge with stripes of neighboring zebras so that they appear to be the same zebra.

Continuity may appear to be based more on illusion than reality.

But thanks to it, our lives are made simpler and more manageable.

We are able to function in a notoriously complex world so that drowning in the details doesn’t have to be the option.