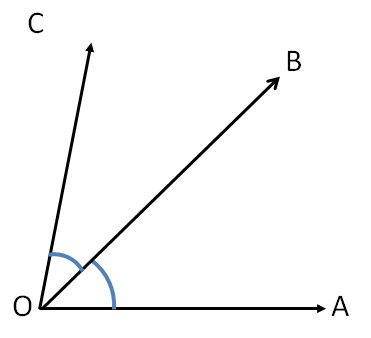 Angles are everywhere around us. They form part of the basic structure of many of the shapes that we encounter in our daily lives.

Adjacent angles are angles that share a common vertex and arm or side and do not overlap. They instead lie on opposite sides of the arm they share.

But it is important to note that not all supplementary angles are linear pairs. For angles to be called linear pairs, the lines should intersect each other and they must form adjacent angles.

When the sum of two adjacent angles is 90 degrees they are referred to as complementary angles.

To help us further visualize what adjacent angles are/look like, here is a quick list of their important properties:

Adjacent angles aren’t just a theoretical concept. These angles can be found in real life.

Below are some examples of adjacent angles in real life.

1. The Hands On A Clock Face

Clock faces have three hands: the second, minute, and hour hands. These hands form a variety of angles as they rotate about the center of the clock face.

For example, an angle is formed between the hour hand and the minute hand.

A pair of scissors consists of two arms that meet at a pivot point. When the scissors are opened, a pair of angles is formed on either side of the scissors.

An angle is formed between the bottom part of one arm and the handle on the opposite arm of the scissors.

The second angle is formed between the two handles of the scissors.

The roads that meet at crossroads form angles. Consider three roads A, B, and C meeting at a crossroads.

An angle is formed between the pen and the surface of the table.

5. Open Book With An Open Page

When you open a book and a page remains open, adjacent angles are formed.

The first angle is formed between one side of the book lying flat on the table and the open page.

The two angles have a common vertex i.e. the spine of the book. They also share a common arm i.e. the open page.

6. Ladder Leaning Against A Wall

When a ladder is placed against a wall, an angle is formed between the ladder and the wall.

Another angle is formed between the opposite side of the ladder and the upper part of the wall.

These angles share a common arm (the ladder). They are adjacent to each other. The sum of these angles is 180 degrees. They are therefore also supplementary angles.

7. Slices of pizza lying next to each other

Pizza slices are a delicious example of adjacent angles in real life.

Each slice of pizza forms an acute angle. When two slices lie against each other, they form adjacent angles with a common vertex and a common arm.

Sliced pizza in a box, therefore, consists of several pairs of adjacent angles.

8. Fingers when your hand is opened

When we open our hands and spread out our fingers, angles are formed between our fingers.

An angle is formed between the index finger and the middle finger.

Another angle is formed between the middle finger and the ring finger.

The examples above show that adjacent angles are much more than a theoretical concept in geometry. They are part of the world around us.