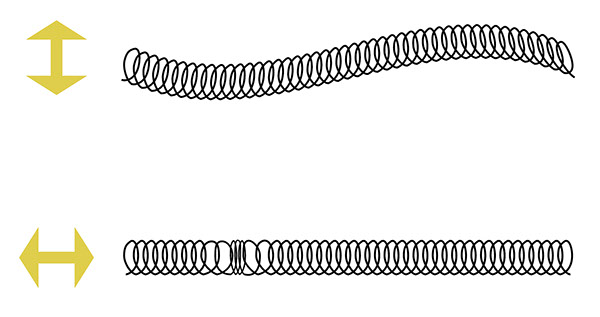 Compression and rarefaction are just like siblings. That’s because they stay right next to each other as neighbors in longitudinal waves.

When we speak of compressional waves, we are usually referring to mechanical longitudinal waves.

Since they are mechanical waves, they need a medium through which they can be transmitted. This is unlike electromagnetic waves such as light which can also transmit through a vacuum.

Compression comes from pressing two things together so that they come nearer to each other. A compression wave does the same thing: it is a wave where we have some areas with particles that are densely piled close together.

As is the case with all waves, compression waves have the attributes of waves such as the following:

You can get the speed of transmission of a compression wave through the formula:

You can see the compression nature of a wave through the sound created by a tuning fork.

As the tine vibrates, the energy in it causes a disturbance in the air which pushes air molecules against each other in a longitudinal wave.

The vibrations move are in a parallel way relative to the direction of the sound.

Here are 8 examples of compressional waves in real life.

The world would be an oddly dull place without sound! Sound is an example of a mechanical wave. They transmit as waves that are caused by disturbances of air pressure.

Sound can also be transmitted through solid material. They are only transmitted as compression waves when they travel through fluids such as air or water.

When they are transmitted through solid, they can be both compression waves or transverse waves whose vibrations occur vertically relative to the sound direction

Seismic waves are one of the most dramatic sources of compression waves.

They come from earthquakes, landslides, volcanic eruptions, explosions, or anything that causes a sudden movement of the materials on the earth’s surface.

Note that not all seismic waves produce compression waves.

P waves travel much faster than S waves and therefore are used as the first warning signs of an earthquake.

One of the most fascinating actions of compression waves can be seen with slinky springs.

By pushing or pulling on the spring in a horizontal direction, you can produce compression waves.

This differs from turning a slinky up and down which also produces transverse waves.

Springs with compressional waves are used in car suspension systems, bed mattresses, and also on scales for measuring mass.

Have you ever been hit by a tsunami? We hope not! These are water waves that depict both compressional (longitudinal) and transverse aspects.

Its immense energy is transmitted into it from an earthquake or volcanic activity deep in oceans.

The shock waves transmitted into the water from the earthquakes can travel over hundreds of miles at a fast speed.

When the tsunamis approach land or shallow waters they become compressional waves.

5. Walls vibrating due to booming music

When you are relaxing at home with some music, your neighbors may notice their walls shaking due to the sounds.

The sound from your loudspeaker becomes airborne and transfers its energy into the walls when it strikes them.

Since waves can travel through solids as it does through air, it is radiated through the walls.

The same waves in solids can be both compressional and transverse unlike in fluids (air and liquid) where it is only longitudinal.

Supersonic jets are planes which fly at speeds exceeding the speed of sound.

Its movement in the air pushes the air around it which vibrates causing sound waves that have both compression and rarefactions.

Since the plane is faster than sound, it catches up and overtakes the waves it causes.

So, you will even catch sight of the plane without hearing the sound yet.

As the plane passes, it is followed by a sonic boom which is the loud sound of all the sound waves combined behind the plane.

Have you ever had your doctor recommend a diagnostic ultrasound?

Ultrasounds are literally like sound but with a frequency that is higher than 20,000Hz (20 kHz).

Unlike the normal sound you can hear, you can’t hear ultrasound. That’s because its frequency is too high, making it inaudible or undetectable to human hearing.

They are used as an alternative to X rays to scan and produce images of internal body parts.

For example, pregnancies can be scanned by ultrasound. The sound penetrates soft tissues or fluids but bounces off when it hits denser body parts.

From country music, rock music to flamenco, acoustic guitars can be used to create a wide genre of music styles.

The Guitar strings produce very little disturbance in the air when they act on their own.

To produce a magnified effect, they are attached to a soundboard.

When you strike the strings, the vibrations are transmitted to the soundboard which also vibrates. This in turn is amplified by the guitar body which functions as a hollow soundbox.

Throughout this process, the energy is transmitted as compression waves through solid substances from the strings, soundboard, and body of the guitar.

Compression gives the image of getting crushed under the grip of a bear hug.

But thankfully, there is a rarefaction side to it where you are relieved from the chokehold.

Despite their shocking contrast, this pair of siblings can make a great team in packing a mean punch.