HomePhysicsWhat is Rarefaction in Waves?
Physics

What is Rarefaction in Waves? 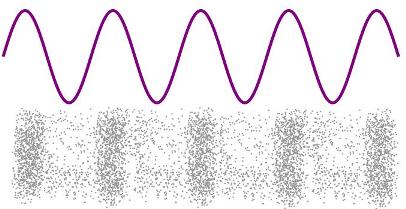 Waves are energy vibrations that are transmitted through a medium.

However, the direction in which these waves vibrate can make all the difference.

This is what makes longitudinal waves distinct because they undergo rarefaction.

Rarefaction is a state that describes a wave showing parts with lower density or low pressure of particles.

In other words, it is the region wherein the particles of a wave (longitudinal waves in this case) are the most further apart (see the diagram below).

The particles are placed less densely or sparsely together than in other areas.

Rarefactions are usually alternated by neighboring areas where there is compression. Compressions are high-pressure areas where particles are much closer to each other.

The patterns showing rarefaction and compression are repetitive as the wave travels and extends in the medium.

Rarefactions are a characteristic of longitudinal waves which are waves that are transmitted longitudinally.

These kinds of waves are contrasted with transverse waves because of the different ways their waves vibrate.

Also, while transverse waves have peaks and troughs, longitudinal waves instead have rarefactions and compressions.

Another difference is that transverse waves (e.g., electromagnetic waves) can be transmitted in a vacuum and don’t need a medium.

Rarefactions (and compression) can only be observed in waves that transmit in mediums like solids, liquids, or gases.

Therefore, they don’t exist in a vacuum. This means that rarefactions are seen only in mechanical waves.

1. Transmission of sound by loudspeaker

The loudspeaker acts as a source of sound waves. You can feel a loudspeaker vibrate when you place a finger on it.

With every vibration it makes, the air in front of it is compressed. This causes an area of high pressure in air molecules creating a flow of air outward.

This in turn pushes the next air layer in front and produces the same compression.

Between each vibration, the loudspeaker moves back producing an area of low pressure or rarefaction.

This creates a series of compressions and rarefactions.  The result is a traveling sound wave which spreads out in space.

As the disturbance in the air travels, each compression is followed by rarefaction and another compression as the loudspeaker continues to produce more vibrations.

We hear the sound when it hits our eardrums, the vibrations are turned into nerve signals which are interpreted by our brains as sound.

2. Vibrations of our vocal cords

Vibrations are produced by our vocal cords when we speak. This sets off air molecules into motion outward.

The immediate space in front of the cords becomes filled with densely compressed air molecules.

This propagates forward leaving a less dense space just behind it that produces a rarefaction.

As the next vibrations of your vocal cords occur, the cycle is repeated with a compression of molecules produced followed by another refraction.

Some animals such as dolphins use sound in a clever way to locate objects such as prey.

They emit sounds that are high-pitched (high frequency). Then they listen keenly for any echoes.

Echoes are sounds that are reflected back when the sounds sent out bounce off from any hard object they strike.

The echo has the same sound characteristics such as rarefactions and compressions.

The dolphins first produce the sounds as high-frequency clicks coming from their foreheads.

These produce energy pulses in the water that transmit as alternations of rarefactions and compression regions of the water molecules.

When these hit the target, they bounce and move back toward the dolphin.

Using their jaws to detect the reflected sound, the dolphin is able to tell the distance, texture, size, and shape of the object.

This is because the reflected sound (echo) has a different arrangement in the rarefactions and compressions that enables the dolphin to identify a specific object.

Using this skill, dolphins have been used by the US Navy to locate mines in the sea.