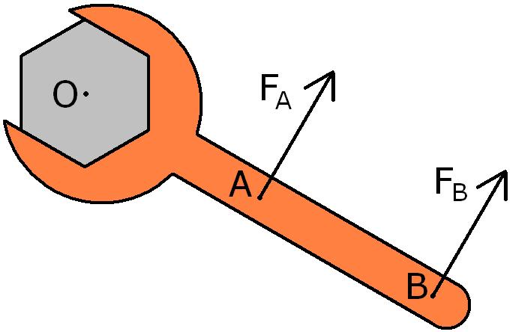 Many forces familiar to us operate in a linear fashion. For example, a car moving on a straight road.

Forces are the subject of linear kinematics, an area that studies objects whose motion takes place in a straight line.

However, torque forces act differently from this. They are rotational forces with a turning effect, making objects rotate around an axis.

They can also be described as twisting actions or moments of force.

Examples of torque actions include a swinging door, opening a bottle cap, or turning a radio knob.

Torque is a vector whose magnitude can be found by the formula:

Torques is measured in units of Newton-meters or pound-feet.

As you can see, torque forces can be increased either by increasing the distance of the moment arm or the amount of force.

Both are based on Newton’s 2nd law of motion which makes them equivalent.

Gyroscopes are devices used for navigation or orientation. Ships and planes use them for steering. Ballistic missiles, space launch vehicles, and orbiting satellites also rely on them.

Torque forces are created due to the spinning parts of the gyroscope. This causes the gyroscope to act as a sensor to direct a plane or other aerial vehicles with guidance systems.

A pendulum is a freely swinging weight that is suspended from a pivot.

Torque forces act on it due to its oscillatory motion around the pivot.

Pendulums are used in friction pendulum bearings to take advantage of their constant swing intervals.

They are fitted in building designs to offer protection against earthquakes.

The pendulum motion causes the gently swaying of a building in rhythm with the shifting ground during an earthquake. This action minimizes damage from the earthquake

A seesaw is a plank whose middle rests on a support that acts as a pivot.

When two people sit on opposite sides, their weight applies torque forces that cause the plank to pivot.

The amount of torque force is determined by the distance a person is seated from the middle and also the weight of the person.

For example, if the person sits closer to the middle, the torque amount he applies is reduced. Also, a heavier person applies more torque.

When opening or closing a water tap, your hand turns the handle and applies a torque force in a rotational direction.

The pivot point is the joint or screw area around which the tap rotates.

Shorter or smaller handles make it harder to open or operate the tap.

In contrast, it takes much less effort to operate the tap with a longer handle.

Taps with no handle are almost impossible to open or shut.

Wrenches are used to loosen or fasten bolts and nuts.

Through the force and rotary motion produced by your hand, a torque force causes the nut to also rotate and either loosen or tighten.

The bolt or nut acts as a pivot.

The longer your wrench handle is, the greater the torque, making it easier to turn difficult nuts or to make them tighter.

Torque also measures how tightly your bolts and nuts have been fastened.

Wrenches can be calibrated so that they give you just the right amount of torque you need.

It uses the exact time intervals of a swinging pendulum for timekeeping.

However, the clock has to be stationary so as not to disturb the pendulum’s regular motion.

Grandfather clocks are admired for their craftsmanship and the remarkable ability for giving accurate time.

A torque causes a door to open when you turn the door.

The door hinges act as the pivot point.

It is much easier to open the door at the furthest end from the hinges than from near them. This is because the nearer you are to the door, the lower the torque required.

Parts of a vehicle such as the clutch, suspension system, chassis, gearbox, and shock absorbers depend on torque forces to provide smooth control and comfort for the car user.

One of the items used is torsion springs. These are helical-shaped springs that produce a rotary or torque force. They are able to resist twisting because they revert to their original state when twisted.

Torque forces are the rotational counterpart of linear forces.

Unlike linear forces which act in a straight line, they move in a circular way.

This difference has made it possible for us to harness many technologies that make use of rotational forces.