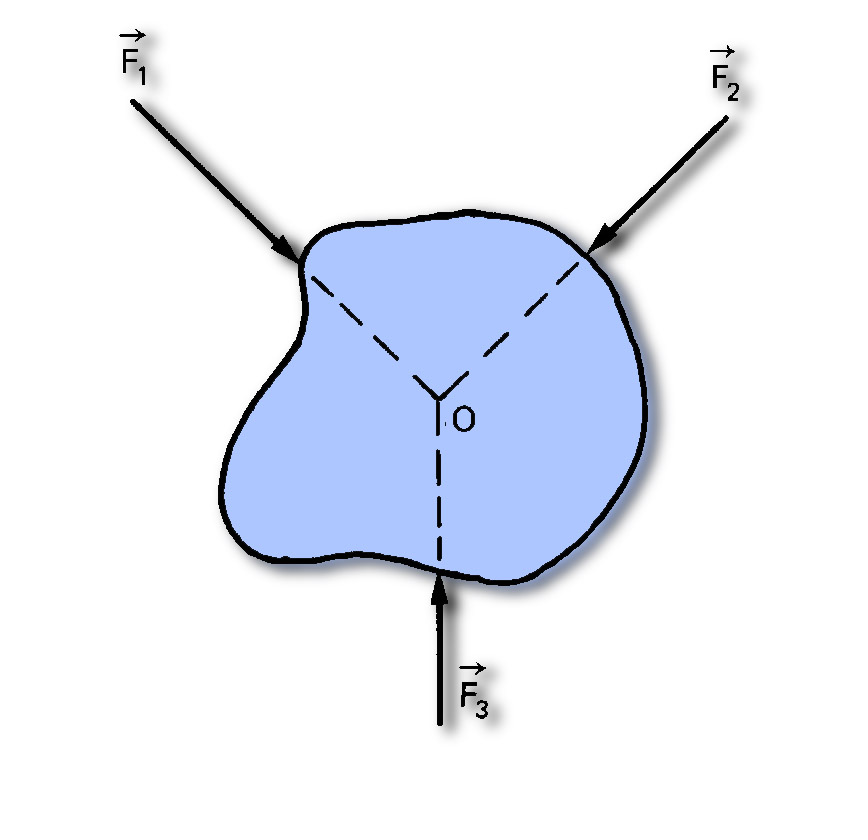 From mashing potatoes in the kitchen and typing on a keyboard to using a crane to lift heavy construction materials, we apply force in our daily lives to push, pull or lift objects.

Many of us often apply forces in one direction e.g. when pushing a heavy box, we will apply force to the box in the direction we want the box to move.

However, there are instances when multiple forces from different directions can be applied to an object.

When all the forces acting on the object pass or act through a common point, they are known as concurrent forces.

In order for forces to be concurrent, the lines of action of all the forces must come together or act through a common point.

The line of action of a force is the vector through which the force is acting. The vector of the force represents its direction and magnitude.

Traffic lights that are suspended over streets are often held up by two cables. The cables are under tension acting in opposite directions.

Gravitational force also acts on the traffic lights pulling them down.

All the forces are acting in different directions but meet at a common point. They are therefore concurrent forces.

Tug of war is a game or sporting event that involves people pulling on different ends of a rope.

Two people (or groups of people) stand on opposite ends of the rope and pull on it at the same time.

There are, therefore, two forces acting on the rope. Each force acts in the opposite direction of the other.

However, the forces intersect at the same point. They are therefore concurrent forces.

A cable joint is used to maintain continuity in electrical cable systems.

Cable joints in overhead cables have three forces acting on them. The two tension forces run outward from the cable joint in the direction of the two cables being joined.

The third force is gravitational force acting downward. All these forces intersect at a common point (the center of the cable joint).

A lifting eye is a simple device that is used to make lifting of heavy objects easier.

In its simplest form, it consists of an eyebolt through which a cable is passed.

Tension forces act in opposite directions along the cable. Gravitational force acts on the object pulling the lifting eye downward.

All these forces intersect at a common point (the eyebolt).

Cranes are used to lift heavy objects. A crane boom has two forces acting on it.

Gravitational force acts downward on the object the crane is lifting and causes tension on the crane’s cable.

The crane boom exerts an opposing force to lift the object.

Both of these forces meet at a common point. They are concurrent forces.

6. A Necklace With A Pendant

Necklaces or chains are accessories that many people wear to enhance their looks or express their personal style.

Many people wear chains or necklaces with a pendant. The pendant hangs off the necklace or chain.

There are three forces acting at the point from which the pendant hangs.

These are the two tension forces acting along the chain or necklace in opposite directions and gravitational force acting downward.

These forces meet at the point from which the pendant hangs and are therefore concurrent.

Barges are used to transport large and bulky objects such as mounds of garbage on water.

Tugboats may be used to pull barges and get them to their destinations or help them navigate into a harbor.

Two tugboats may be used to pull the barge. A rope is passed through an anchor eyebolt and attached to the tugboats.

There are three forces acting at the bolt. There are the two pulling forces of the tug boats and drag caused by the weight of the barge and resistance of the water.

These forces act in different directions but meet at a common point.

Guy wires are used to support electric poles. The wires are attached near the top of the pole and anchored into the ground at different points around the pole’s base.

These cables prevent the pole from moving or collapsing.

The cables pull the pole in different directions but meet at a common point (the center of the pole). They are concurrent forces.

9. An Object Resting On An Inclined Plane

When an object is resting on an inclined plane, there are several forces acting on it.

There is the gravitational force acting perpendicularly to the object in a downward direction.

There is the frictional force that acts in the opposite direction of the incline and holds the object in place.

There is acceleration acting in the direction of the incline. If this force exceeds the frictional force, the object will begin to move down the incline.

There is a normal force that is opposite to gravitational force and acts perpendicular to the inclined plane.

All these forces meet at a common point and are therefore concurrent.

10. The Nodes On A Truss Bridge

Truss bridges feature trusses that are arranged to form equilateral or isosceles triangles.

Adjacent truss members are connected by nodes. Each node has four forces acting on it.

The nodes are pulled in 4 different directions by the two trusses that form the legs of the triangle, the truss that connects one node to the other and gravitational force.

All these forces meet at a common point (the node). They are concurrent forces.

There you have it; 10 examples of concurrent forces examples in real life.

We apply concurrent forces in our everyday lives. They help us lift loads as well as in achieving balance.