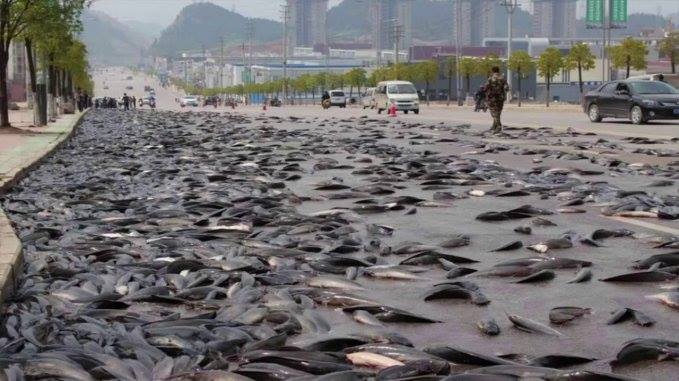 Reports of fish raining from the skies have been frequently recurring.

From ancient times up to more modern times, witnesses have continued to report such incidents.

This brings to mind similar accounts in the Bible where frogs or gnats were transported in large numbers and deposited on homes during the showdown between Moses and Pharaoh the Egyptian king.

However, beyond folklore and myth, is there any credible basis for such events?

There are several documented cases of fish raining or animal rain throughout history.

For example, Pliny the Elder, a Roman naturalist, first records this event in his writings, Natural History. Writing in the first century about 77 AD, Pliny describes storms of frogs and fish.

In the 1880s, residents of Missouri, Dubuque, and Kansas City were astonished by a shower of frogs. Accounts of storms that deposited fish, turtles, snakes, and small alligators have also been reported by residents in mentioned areas.

Lluvia de peces or Spanish for “rain in fish” is another curious fish raining example. At least once or sometimes twice a year, this event is said to occur in Yoro, a small town in Honduras.

It is reported that the phenomenon dates as far back as the 1800s. After every storm, the streets of Yoro are left filled with small fish that are still alive.  This incident is marked by an annual festival by the locals from 1998.

On February 25, 2010, fish was also seen falling from the sky in Lajamanu, a small town in the Nothern Territory of Australia.

Despite these recorded cases, the incidents are considered to be very rare and confined. In fact, fewer than 10 incidences have been reported in the past year, so your local five-day weather forecast may not include fish or frog showers.

The cause that is thought to be behind raining fish is tornadic waterspouts, which is a weather phenomenon.

Tornadic waterspouts are the result of violent storm clouds that form a vortex above water bodies.

This is a whirlwind that resembles a tornado. It spins on oceans, ponds, or lakes at a speed that can reach 160 km per hour.

The source of the water in a waterspout is the condensation in a cloud and not the water body below.

Waterspouts frequently occur in subtropical or tropical waters. They need high humidity levels and warmer water temperatures when compared to the air above them.

The waterspout is powerful enough to pick up objects from the water—ranging from pebbles to aquatic animals.

Besides fish, it is said that other animals like bats, snakes, jellies, and birds have been swept up in this way.

As the waterspout progress inland, it loses its energy, resulting in its content (fish, frogs, or snakes, etc) falling from the sky.

Tornadic waterspouts should not be confused with fair-weather waterspouts which are much milder and more common.

Fair-weather waterspouts come from slower-moving clouds which makes them static. They do not have enough force to lift up the objects and they are considered to be less destructive.

Besides waterspouts, another commonly offered explanation for fish rainfalls is Updrafts.

Updrafts are wind currents that can be much stronger than waterspouts with the ability to carry large animals including snakes, bats, jellies, and frogs.

They are caused when warm air coming from high-pressure areas close to earth ascends to cooler areas where there is low pressure.

Given that the cooling (in low-pressure areas) causes the water in the air to condense, updrafts play a critical role in cloud formation and storm development.

Compared to moderate-intensity waterspouts, updrafts may reach speeds of up to 60 miles per hour during thunderstorms.

Both waterspouts and updrafts behave the same way when they advance toward land from the sea. They eventually lose momentum or energy and then begin to dump their loads.

By then, their unwilling passengers (fish, frogs, small alligators, etc) will be far away from their original habitats—which explains the appearance of these animals raining from nowhere.

Usually, the heaviest loads are dropped first followed by lighter objects.  This perhaps explains why witnesses of animal rains usually report a pattern where particular animals are dropped at specific spots.

For example, fish that are heaviest may be dumped first followed by insects, and then raindrops which are the lightest.

While the waterspout and Updraft hypothesis seem supported by the types of animals that are often observed in these rains—mostly aquatic—and by the fact that these unusual rains are often proceeded by storms, there are a few limitations worth noting:

Fish or animal rains can also be said to be cases of ecological misfortunes.

Perhaps flash floods or torrential rains forced fish out of their habitats or cause ponds and rivers to surge over their banks, depositing the fish on the streets. After the storm, people may see the fish all over the street and incorrectly assume that they fell from the sky.

Indeed, urban dwellers underestimate the number of organisms in their immediate environments. Consequently, they may suspect and falsely report that animals fell from the sky rather than displaced from their natural habitats.

In the same vein, ‘bird rains’ can be explained by a flock of birds getting carried by strong winds to high altitudes, making them freeze, get exhausted by the inability to land, or get battered to death by the turbulent winds. Once the winds subside, the dead birds may then fall upon the astonished population below.

This also explains cases of flesh and blood rains—probably the carried animals get badly battered that they become hard to recognize.

A bounty harvest of fish with no sweat is certainly welcome news for any town locals yearning for some fish delicacy.

But as scientists have shown through their skepticism, these tales are probably anecdotal or at any rate, the phenomenon is very rare.

The only certain way to get fish would have to be to continue going out to sea—not waiting for the skies to release their fishy load.