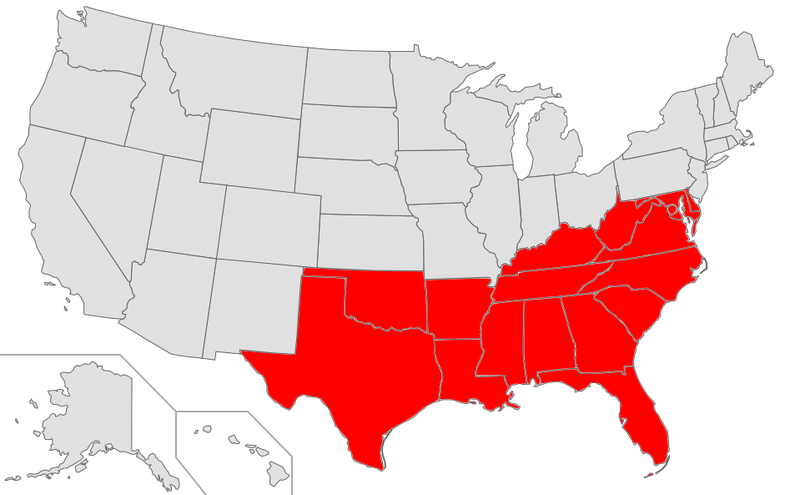 In government, business, or military operations, it is usually useful to be able to recognize and distinguish different geographical regions on the map.

One way of doing this is through vernacular regions or perceptual regions.

This is a way of dividing regions based on attributes like shared identity or history of the area that is reflected by people’s feelings.

Vernacular regions are not usually created by professional geographers.  Instead, they are invented by average people, usually the locals of the region.

Vernacular regions can be different things to different people depending on their ideas or thoughts.

Due to this, vernacular regions have loosely defined boundaries that depend on people’s views or perceptions.

However, in everyday conversation people of the area will recognize the regions by informally referring to it through vernacular terms or their ordinary language.

These can be unofficial names or nicknames. The names of vernacular regions usually carry some meaningful images to the people.

These can be based on landmarks, sights, or local displays of public art.

Some Examples of vernacular regions

The East Coast in the United States is defined by a corridor that lies between New York City, Boston, Washington DC, and Philadelphia.

It is viewed as the political and economic hub of America which helps to identify it.

The Deep South is another vernacular region in the United States whose chief unifying symbol is the region’s historical link to the Confederate States of America of the 19th century.

This designation does not coincide with any officially recognized region but draws from the people’s perceptions of political and historical characteristics.

The Midwest is also an example of a vernacular region since people don’t agree on its actual boundaries. It comprises about 12 states in the north-central area of the United States.

Some of the perceptions or mental images associated with it are its idyllic or laidback lifestyle, open spaces, and also a distinct accent that is differentiated from the American South, the American West, and urban American Northeast.

Studying vernacular regions helps to recognize richer elements about places that are not captured by official borders or designations. This is because it comes from the insights of the local people who live there.

It also recognizes that regions are not fixed once and for all such as depicted in maps.

Instead, it views places as dynamic and flexible based on people’s continuous interactions.

Vernacular regions can be contrasted with formal and functional regions.

Formal regions are areas with administrative or political boundaries that are well defined and beyond dispute.

States, countries, or provinces are examples of formal regions. Zones such as national parks or school districts that are enclosed with official boundaries are also considered to be formal regions.

Natural physical features can also be used to mark boundaries e.g., the Rio Grande forms part of the boundary separating Mexico and the USA.

Formal regions are also known as uniform regions because they have at least one attribute that is uniform across the whole region.

A formal region is defined by facts that are not in dispute or debate between different people. For example, cities or towns have set boundaries that can be proven.

Functional regions are defined by a node or center that produces a function that serves the surrounding areas e.g., utilities like water supply to surrounding areas by pipes from a water company; electricity from a power plant with power lines distribution; pizza delivered from a distribution center.

As you move further and further away from the center, its influence fades.

An example of a functional region is cities such as Detroit. Detroit is surrounded by several towns which together form the Detroit Metroland. People travel from these areas to Detroit city when going to work.

1. What is a vernacular cultural region?

A vernacular cultural region refers to an area that has a shared unique culture among its people.

For example, it may be a religion, a local spoken language, a dialect, or a unique political orientation that is collectively perceived by its inhabitants.

A vernacular cultural region can be represented by a nickname. For example, Dixieland is a nickname standing for the Southern United States.

One of its cultural symbols is the minstrel songs that were produced in the South during the Civil War.

Since Dixieland lacks a clear definition of where its boundaries lie, it is a vernacular region.

2. What is the difference between a formal, functional, and a vernacular region?

As aforementioned, formal and functional regions are usually based on facts that cannot be debated. The facts on which they are based can be proven.

On the other hand, vernacular regions are less certain and are based on people’s subjective feelings or prejudices about a region. These may be factual or not.

Whereas vernacular and formal regions are based on similarity of characteristics in culture, climate, or geographical features, this need not be the case with functional regions.

Vernacular regions are less well defined compared to functional and formal regions. This is because it is based on people’s perceptions which vary.

There is usually more agreement about the functional and formal region than for vernacular regions.

Finally, functional and formal regions are created by the authorities or geographers but vernacular regions are formed by people of an area based on their sense of place.

3. Is the Middle East a vernacular region?

Yes. People usually only have a rough idea of where the Middle East is without agreeing on where its actual boundaries are.

Therefore, some may include some countries while others may exclude others.

For example, does Egypt lie in the Middle East or Africa? There is no universal agreement. Due to this imprecision given by various people, the Middle East can be considered a vernacular region.

However, the Middle East can also be viewed as a formal region due to the attribute of religion. This is because the Islamic religion is a highly uniform attribute in the region, giving it a distinctive religious identity.

4. Is Australia a vernacular region?

Australia is a continent that is located in the Asia Pacific region. It is part of the South Pacific and British Commonwealth.

Since it’s a geographical and political unit with clearly identifiable boundaries, Australia is not a vernacular region.

Its boundaries can be proven which establishes it as a formal region.

However, Australia has some well-known pockets of vernacular regions within it such as Outback Australia.

5. Is New York a vernacular region?

Yes. New York has also been nicknamed the Big Apple to reflect that it is defined by feelings or perceptions.

This name has a cultural image because it was previously associated with horse racing, dance, and jazz music before it faded from use in the 1950s.

However, it was revived again and continues to be associated with New York City as the capital of the world.

Tourists think of Big Apple when they think of New York.

Like other cities in general, New York can also be considered a functional region since it has subways, highways, and railroads connecting the suburbs to the central parts of the city.

6. Is the Bible Belt a vernacular region?

Yes. The Bible Belt is an area that lies in the southern part of the United States.

Its identifiers are culture and politics which are mainly shaped by social conservative Christianity.

Its people are known as the most church-attending people in the United States.

Because it is not defined by an actual border which all can agree on, the Bible Belt can be viewed as a vernacular region.

Perceptions or stereotypes that people hold about the Bible Belt are low college graduation rates, high incidence of obesity, and affiliation with conservative values.

7. Why is the South a vernacular region?

The area called the South lacks a well-defined boundary. This is because the boundary is defined differently from person to person.

For example, some may include all the former states of the Civil War Confederacy while others may exclude Oklahoma or Missouri.

Some of the unique characteristics that people associate the South with are cotton farming, a distinctive climate, low education achievements, and the popularity of talk show radios.