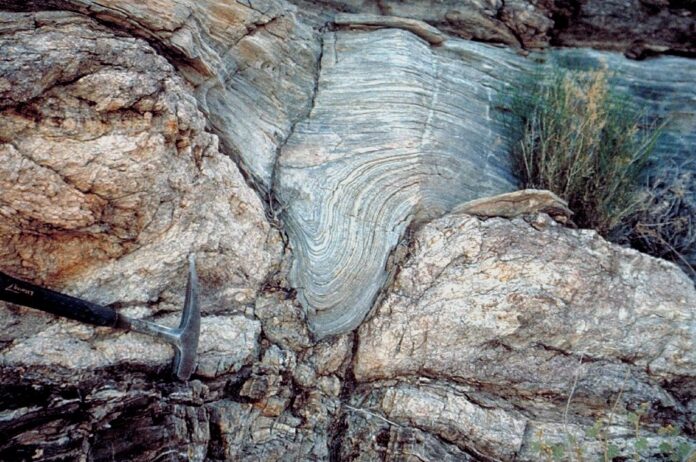 Metamorphic rocks are formed when Igneous or Sedimentary rocks transform.

The word metamorphic is derived from two Greek words, Meta which means change, and morphe which denotes form. Metamorphic, therefore,  means a change in form.

Metamorphic rocks are formed within the earth’s crust when the existing rocks are subjected to high temperature and pressure.

Great compression forces cause high pressure during earth movement. When the high pressure compresses the pre-existing rocks, their structures are altered. The resulting metamorphic rocks are more rigid and more resistant to erosion.

Naturally, the temperature within the earth’s crust is very high. The high temperature causes the pre-existing rocks to re-crystallize. The resulting metamorphic rocks are different in appearance, texture, and properties.

Some sedimentary rocks are soluble in water. When water flows over the rocks, some material is removed from one rock and deposited on another—the action of water results in rocks with different chemical compositions hence different characteristics.

Metamorphism can be distinguished into three different types, namely;

Metamorphic rocks are harder than the original igneous and sedimentary rocks from which they were formed. They resist erosion because of their hardness.

Metamorphic rocks are rich in valuable minerals and rocks. They provide rocks used to make gemstones and ornamental building stones.

Soapstone is a soft, dense heat resistant rock. The metamorphism of ultramafic protoliths forms it.

Its primary component is talc with traces of chlorite and carbonates. Soapstone is suitable for curving because it is soft and heat resistant.

Marble is formed from the metamorphism of limestone. It is mainly composed of calcium carbonate.

It occurs in different colors and that’s why it is used as a coloring agent in the paper and cosmetic industry. Marble is also used in constructions and sculpture.

Amphibolite is formed from the re-crystallization of igneous rocks such as marl.

Its main component is amphibole with traces of quartz.

It is dark, hard, and can be polished easily. It has an attractive polishable texture and is often used in paving and construction of buildings.

Slate is derived from shale sedimentary rock (it is a fine-grained dull rock). Its main component is clay and volcanic ash.

It occurs in many dull colors such as gray, purple, and green. It is used for roofing, flooring, and decoration of gardens.

Quartz is produced from the metamorphism of sandstone. It is a hard crystalline rock. It is mainly composed of silicon dioxide.

There are many varieties of quartz called gemstones. Quartz occurs in many colors and is used for making ornaments and carvings.

Phyllite is formed when sedimentary rocks are altered by heat and pressure. It is foliated with a shiny surface.

Its main component is quartz with traces of mica and chlorite.

Schist is formed when regional metamorphism occurs on sedimentary rocks.

It has medium-size grains and is rich in minerals such as tal, graphite, and micas.

It is shiny gray and splits easily. It is used for making roofing material, paint fillers, and making jewels.

The rock is altered to hard rock with fine grains. The chemical composition of hornfels is similar to that of the rock from which it is formed.

Hornfels is used for making floors, paving, and exterior facing.

Gneiss is characterized by alternating dark and light bands. It is medium-grained with a rough texture.

The chemical composition of the lighter bands differs from that of the darker bands.

It is used for flooring, making gravestones, and making ornamental stones.

Hornblende is a non-foliated rock with fine grains. It is formed when sedimentary and igneous rocks undergo contact metamorphism. Its color ranges from brown to dark green to black.

Hornblende is ground into powder and used in road construction.