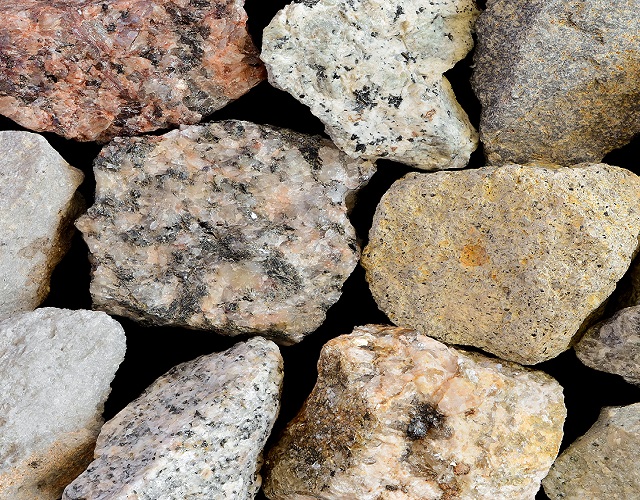 What happens to this magma? It tries to escape upward. This can lead to the formation of two types of rocks: intrusive or extrusive igneous rocks, depending on where the magma cools to crystallize and become solid.

Extrusive rocks are a result of molten magma that succeeds in reaching the surface, often oozing out or erupting through volcanos or tectonic boundaries, faults, or fissures.

They solidify almost instantly due to the cooling effect of the air.

However, since they are trapped several meters under the earth, intrusive rocks can take millions of years to cool and solidify.

Geologists use the texture and chemical or mineral makeup of igneous rocks to classify them.

Both extrusive and igneous rocks have mineral forms but since intrusive rocks solidify over longer periods, their mineral texture is more coarsely grained. This is because they have had time a longer time to develop or grow.

This black 7-meter feet pillar is made of diorite igneous rock.

It contains inscriptions of the laws made by the famous Babylonian King Hammurabi, written about 1750 BC.

Dolerite consists of hornblende, biotite. It has a mineral composition that consists of sodium-calcium plagioclase causing it to have a salt and pepper appearance.

They usually form on convergent boundaries. They are frequently located in batholiths that lie above subduction zones that have island forms.

Structurally, diorite is similar to granite except for its darker appearance. For this reason, it is known as black granite. However, unlike granite, it’s much rarer.

These dark grey rocks are usually seen at the lower parts of continental crusts.

Geologists date them to belong to the Proterozoic and Archean eons.

Chemically, they are composed of mafic (iron and magnesium-rich silicate minerals).

They have a dark grey appearance and are coarse-grained or phaneritic.

Gabbro is what you get when diabase, another intrusive rock, gets coarser.

Gabbro is closely related to basalt but has a larger grain size due to their longer cooling periods.

Gabbro is famed for its bright black luster which makes it useful for making floor tiles or kitchen countertops.

Granite is the rock mostly associated with igneous rocks.

Although they form in the crust, they are commonly seen on the earth’s surface such as in the Yosemite Valley in California.

They are two types of these rocks—pink and white variety. These are quite coarse-grained.

These finely or medium-grained rocks, also called dolerite, are some of the toughest rocks you can find.

Due to this, they are favored in the construction industry as crushed stones.

They usually form in dykes, laccoliths, or lopoliths. This dark-colored rock closely resembles gabbro or basalt but their crystal sizes stand midway between the two.

This rock comes with a mineral composition of mica, feldspar, and quartz.

They are distinguished for their crystal size which can reach over 50 mm.

Pegmatites are highly valued for their minerals like aquamarine, gemstones, topaz, tourmaline, apatite, and fluorite.

They also yield industrially valuable materials like tin and tungsten.

The mountains of Idaho and Colorado for example have pegmatites with beautiful topaz and aquamarine crystals.

This rock gets its name from the glassy green gem called gemstone peridot.

Peridot is an ornamental stone mined from peridotites, such as in the Peridot Cave in Arizona or Asia.

Also, if you want impressive amounts of chromium better look for these rocks.

It’s also a rich source of platinum as the Zimbabwean Great Dyke and the South African Bushveld Igneous Complex can testify.

Peridotite consists mainly of the mineral’s pyroxene and olivine. They are quite dense with a coarse grain.

Chemically, they are ultramafic or ultrabasic.

Everybody gets mesmerized by this human-made stone structure whose construction remains mostly a mystery.

They are one of England’s most prized ancient monuments.

Historians and geologists date their construction to 2100 BC.

They feature an inner circle that is made of diabase rock pillars which are intrusive igneous rock.

It is believed the pillars were transported from the Presell Mountains in Wales over a distance of 240 miles.

The pillars weigh a punishing 4.5 tons each, so imagine the exhausting task of transporting each over such a distance!

Exactly how intrusive are intrusive igneous rocks? Very little so it turns out!

That’s because they are quite shy and stay out of sight.

Being deeply buried, you have to go looking for them deep in the earth preferably with something very expensive like mining gear or equipment.