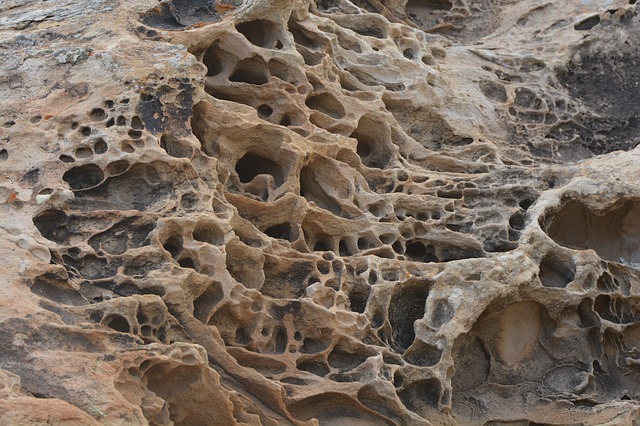 Igneous rocks are found within the earth’s crust. The earth’s interior temperature is high and results in volcanic activity.

Molten magma erupts to the earth’s surface, where the temperature is low. Molten magma solidifies rapidly on cooling to form a glassy solid with fine grains.

Magma is made of igneous rocks. When molten magma (lava) cools and solidifies, it forms extrusive igneous rocks (volcanic rock).

They have the following features.

Basalt is a dark gray solid with fine grains in its structure. It comprises plagioclase and pyroxene.

Basalt is used in the building industry for making blocks, road construction, and making thermal insulators used in houses to minimize heat loss.

Basalt is found all over the earth and on ocean beds in large quantities.

Rhyolite is a pink or gray solid with refined grains and a smooth texture. It contains silica and quartz as its main components.

Rhyolite is used in the building industry to add aesthetic value, road construction as a filler material, and create decorative stones.

Large deposits of rhyolite are found in Germany, India, China, and New Zealand.

Dacite is a pale gray solid with refined grains and a smooth texture.

Silica, sodium oxide, and potassium oxide are the major components of dacite.

When ground into tiny particles, it is used as a filler material in the construction industry.

Silica in dacite reacts with calcium carbonate in cement and can be used as building blocks. It is used for liming of acidic soil to raise its pH.

There are large deposits of dacite in India, Colorado, California, and New Mexico.

Obsidian has a glassy appearance with tiny crystals. It is brittle, shiny and hard.

Silicon dioxide is the major component of this rock.

Obsidian is used for making sharp objects such as cutlery and weapons because of its hardness.

Obsidian is found in many parts of the world, including Canada, Mexico, Argentina, Italy, Greece, Kenya, Russia, and New Zealand.

Pumice is different from other extrusive rocks because it’s course-grained and porous.

The large grains indicate the formation of crystals started within the earth before extrusion.

Pumice occurs in many colors, including green, blue, white, and gray.

Aluminum oxide and silicon dioxide are the main constituents of pumice. It is used for insulation and making abrasives.

Andesite is a light gray rock with small grains and a fine texture.

Plagioclase feldspar is the primary chemical component of andesite.

Astronomers use Andesite as proof of volcanic activity on Mars.

Andesite is found in many regions of the world, near volcanoes and between oceanic and continental plates.

Scoria is a dull rock with fine grains and a smooth texture.

Calcium oxide and silicon dioxide are the major components of scoria.

It is used in landscaping because of the high productivity and construction of drainage systems because of low density and round cavities within its structure.

Scoria is found in parts of the world where volcanoes are found like Mauna Loa in Hawaii, Mount Fuji in Tokyo, Ethiopia, Guatemala, Indonesia, and Mount Kilimanjaro along the Kenya Tanzania border.

Tuff is a medium-grained rock with a rough texture.

It comprises mainly volcanic ash and occurs in light gray and brown colors.

The structure of tuff contains some cinders due to lithification and the slow process of cooling.

It is used for making trass, masonry mortars, thermal insulators, and low-density concrete.

Places with volcanic rocks are rich in the tuff. They include Mull, Antrim, Scotland, Ireland, and Wales.

The occurrence of extrusive igneous rocks is dependent on volcanic activity.

Eruption of volcanoes occurs periodically, and there have never been cases of re-extrusion of already solidified lava.

The volcanic rocks are rare, especially in places where volcanic activity is not common.

Rocks with similar chemical composition as extrusive rocks occur in parts of the world that do not experience eruptions from metamorphic rocks.

The only difference between volcanic rocks and metamorphic rocks is that the latter is not heat modified.

The Boffins' Portal Teamhttps://boffinsportal.com
Boffins' Portal is your free expert-created education content website. We provide engaging content using simple terms, plenty of real-world examples, and helpful illustrations so that our readers can easily understand and get informed in less time.
RELATED ARTICLES
Geography

How many Grains of Sand are there in the World?