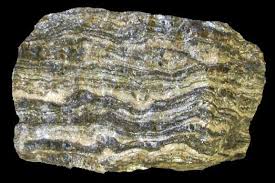 When extreme heat and pressure act on protoliths, metamorphic rocks are formed.

There are two types of metamorphic rocks: foliated and non-foliated.

A foliated rock has distinct layers that repeatedly occur throughout its structure.

Foliated rocks are found within the earth’s interior. They are formed when high pressure is exerted on existing rocks.

The high pressure squeezes mineral particles within the rock, making them aligned.

A sheet-like structure develops on the rocks showing the direction in which pressure was exerted.

There are two categories of foliation in rocks:

Gneiss is formed from the metamorphism of granite.

It is hard and has large grains. It appears in layers of minerals with different colors.

The light bands of gneiss mainly contain quartz, while the darker bands contain biotite or graphite.

Gneiss is used for flooring, making ornamental stones, and gravestones.

Slate results from the metamorphism of clay and mudstone.

Slate appears dull and occurs in many colors, such as purple, red and gray.

It comprises quartz and chlorite. Slate is fine-grained and is used for decorating gardens, roofing and flooring, and making gravestones and snooker tables.

Schist is formed when shale undergoes metamorphism. Schist appears as a large sheet with elongated minerals. It mainly comprises talc and mica.

Schist is used in making walls, as a decorative stone, and in the making of jewels.

Phyllite is formed when Slate is subjected to high pressure. It is fine-grained and appears in many colors.

It is mainly composed of mica. It has a non-metallic silvery appearance.

Biotite results from the metamorphism of igneous rocks such as granite and gabbro.

It is coarse-grained and appears in different colors, including yellow, green, brown, and black.

A large amount of biotite looks like sheets of paper in a book, hence the name “books”

Garnets occur as fragments of other rocks such as amphibolites, mica, and schist.

Garnets occur in many colors including red, orange, green, yellow, pink, and colorless.

It is hard and therefore used in making abrasives. It is used as a gemstone because of its hardness and appearance in many attractive colors.

Staurolite originates from gneiss and schist. It contains prismatic crystals within its structure.

It occurs in two colors, black and brown. Its grains are visible and can be identified easily.

Staurolite is used as an index mineral in estimating the temperature and pressure at which the metamorphism of rock occurs.

When you take staurolite, it relaxes your body and relieves you of stress.

Eclogites are formed when rocks rich in mafics are subjected to high temperature and pressure.

It appears in many colors, including green, red and sky-blue. Eclogites have medium-sized grains with inclusions such as titanite and quartz.

Eclogites are used in the construction of bridges and roads.

It appears as black and brown folded veins. Magnetite has contrasting shades of color and irregular veins which make them attractive.

Magnetite is used for making ornaments and building stones.

It occurs in two colors, green and black. It has a shiny appearance with a slippery feel.

Serpentine has fine compact grains. Serpentine is used as a decorative stone and as a source of magnesium.

The formation of foliated metamorphic rocks is a continuous process.

The number of metamorphic rocks cannot be exhausted—new ones are continuously formed.

The appearance of foliated metamorphic rocks contributes a lot to beauty in nature and attractive sites for relaxation.