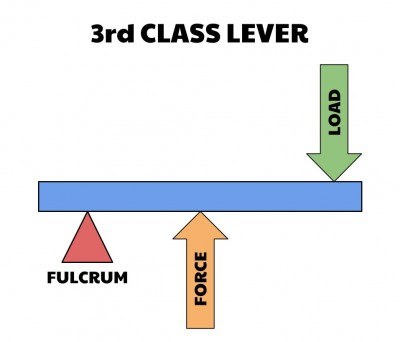 Levers are simple machines. They form the basis of many of the tools we use in our day-to-day lives.

Levers have three basic components: the effort, fulcrum or pivot, and load.

Effort is applied to a lever at one point to move a load that is at another point on the lever. The force of the effort acts through the fulcrum which is the balance point of the lever.

Levers can be categorized based on the positions of the three components. There are three classes of levers: first, second and third-class levers.

Third class levers are those levers in which the effort is located between the fulcrum and the effort.

The mechanical advantage of these levers is low. They can’t, therefore, be used to apply great force to loads. However, they are useful when making precise movements.

Below are some examples of these types of levers.

Barbecue tongs are a third-class lever. The fulcrum (the bend) is at one end of the tongs. The load (the meat) is at the other end. Effort is applied to the middle of the arms of the tongs to grip the load.

A fishing road is a third-class lever when being used to pull fish out of the water.

The load (the fish) is at one end of the fishing rod. The fulcrum is at the other end of the road.

The fulcrum is the point at which the rod is supported by your hand or an anchor.

The effort is at the point where you place your other hand to pull the fish of the water. This point is in between the fulcrum and the load.

A long-handled broom is used as a third-class lever when sweeping the floor.

The pivot or fulcrum is near the top of the handle where you place your hand to support the broom.

The effort is towards the middle of the handle. It is at the point where you place your other hand to push the broom.

4. Using the arm to lift a load

The arm can be considered a third-class lever when it is used to lift a load.

The effort is applied by the bicep through a tendon that attaches to the forearm just below the elbow.

The effort is therefore applied between the fulcrum and load.

5. Using the front teeth to bite

Your jaw works as a third-class lever when you use your front teeth to bite.

The fulcrum is the joint where the lower jaw connects to the skull.

The load is the food or item you are biting on and the effort is the force applied by the muscles of your face to close the jaw.

A pair of tweezers is a third-class lever. The fulcrum is the joint between the two arms of the tweezers.

The load is the item that that is picked up between the tips of the tweezers.

The effort is applied to the middle of the tweezer arms to force the tweezer tips together and grip on items.

A shovel is a third-class lever. The fulcrum is toward the top of the shovel where you place one hand to support the shovel as you dig.

The effort is towards the middle of the shovel. It is at the point where you place your other hand to push or pull the shovel.

The load is the dirt that the shovelhead scoops up.

A hockey stick is a third-class lever when being used to push or strike the puck.

The fulcrum is towards the top of the hockey stick at the point where you place one hand to hold the stick.

The load is the puck at the other end of the stick.

A mouse trap acts as a third-class lever when it is released.

The spring arm applies force to the middle of the snapper arm to move it forward.

When a knife is used traditionally, it acts as a third-class lever.

The load is the blade and the fulcrum or pivot is the part of the hand that is closer to the bottom of the handle.

The effort is applied by the hand to the top of the handle. The effort is therefore between the fulcrum and the load.

When driving a nail into a piece of wood, the hammer can be considered to be an excellent example of third-class levers.

The head of the hammer is the load. The fulcrum is the wrist of your hand and the effort is the force applied through your hand to the point where you grip the hammer.

The effort is therefore in between the load and the fulcrum.

Movements such as kicking, jumping, and running involve flexion at the knee joint.

The hamstring applies effort to the tibia through tendons.

Third class levers are a common component of the machines and tools we use in our day-to-day lives. They are also the most common type of lever in the human body.