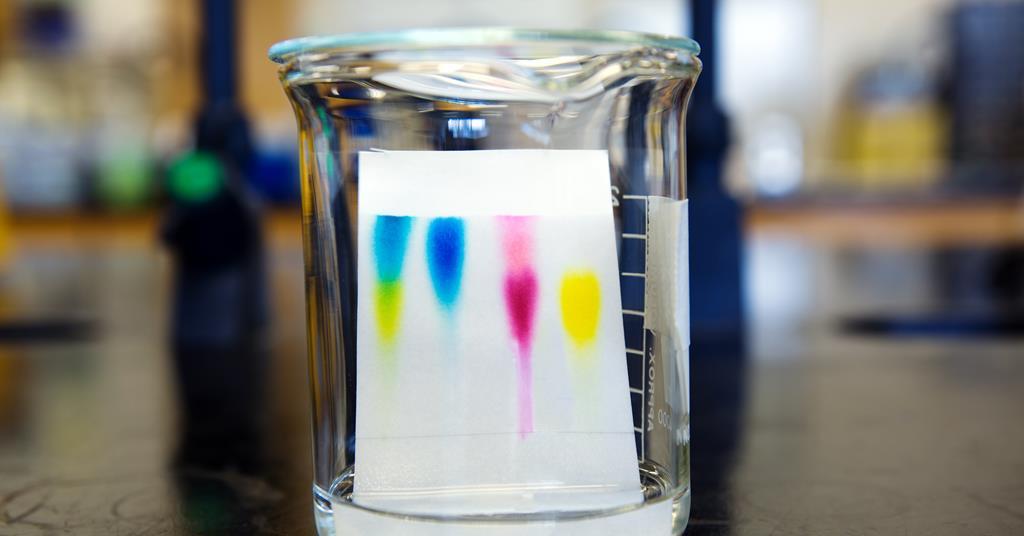 The method we apply in separating components of a mixture depends on the nature.

Physical methods like decantation and filtration separate some mixtures.

A mixture with two or more solutes in a solution is difficult to separate physically. The components of such a mixture can be separated through a medium using a solvent.

Components of a mixture in such a solution can be separated by chromatography.

Chromatography is a technique of separating components of a homogenous mixture whose solubility in a solvent differs.

A solvent that can dissolve the components in a mixture is added to the mixture on a medium such as chromatography paper or filter paper.

There are many types of chromatography. The common ones are:

The type of chromatography we apply in separating a mixture depends on the nature of the components.

Here are five examples of mixtures separated by chromatography:

Colored ink components have different degrees of solubility in water, ethanol, or propanone.

When a filter paper with a spot of ink is put in ethanol, the color pigments spread out, covering different distances from the spot.

The line where the ink spot is put is the baseline, while the line through the furthest point the solvent reaches is the solvent front.

The filter paper is the stationary phase while ethanol is the mobile phase.

2. A mixture of amino acids

When a spot of the mixture is put on a chromatography paper and then dipped in phenol, the amino acids form different colored products with different degrees of solubility.

3. A mixture of different drugs

In forensics, gas chromatography is applied to detect banned substances or poisoning in a drug.

The drug suspected to contain banned substances is run through a gas chromatogram.

Each substance develops its unique mass spectrum in the gas chromatogram.

4. Separation of carbohydrates in a mixture

Carbohydrates in a mixture are separated by thin-layer chromatography (TLC).

The carbohydrate molecules are depolarized before moving through a layer of silica gel.

Heroin can be separated from other narcotics by high-performance liquid chromatography ( HPLC).

The mixture is added to propanol in the mobile phase and delivered to the column, which is the stationary phase.

The mixture is delivered at high pressure from the mobile phase to the column—different components in the mixture flow at different speeds.

Heroin has a low affinity for propanol and flows to the stationary phase faster.

Chromatography is a simple technique of separating components in a mixture with a wide range of applications.

Chromatography requires a small sample for analysis and is applied to a wide range of mixtures.

It is done on simple and readily available apparatus and produces pure samples of components.

This makes chromatography the most popular and widely used method of separation.