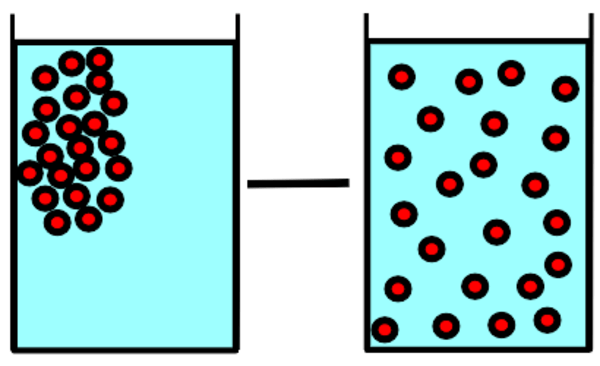 Have you ever wondered how the scent of perfume or hair freshener spreads throughout a room? Or how salt spreads over food in a saucepan without stirring?  The concept behind these processes is called passive transport.

Passive transport is the process by which particles or substances move from a region of high to low concentration via a concentration gradient.

It can be likened to stepping out of a crowd or moving from the train to a subway station’s platform. Essentially, it gives the particles (or ions/molecules) a ‘room to breathe.

The concept is best remembered when juxtaposed with its exact opposite: active transport. While the two mechanisms are employed by the cell to move ions and molecules across biological membranes, they differ in terms of the movement of substances.

We can say that the movement of substances in passive transport is “downhill”, so no energy (e.g ATP in case of a cell) is required while that of active transport is “uphill” and energy is needed as the driving force.

There are 4 main types of passive transport, including:

Many processes taking place in our bodies and in our environment are examples of passive transport. Here are some of them:

1.  Gaseous Exchange in the Lungs

Blood from all parts of the body (rich in carbon dioxide) is carried to the lungs through the pulmonary artery.

Substances like sodium chloride (common salt) and vinegar are added to food to enrich its flavor.

If you add a drop of vinegar to your food, it spreads through passive transport.

When preparing a cup of milk tea or instant coffee, the flavor from the tea bag spreads through the cup of water or milk in a few minutes.

3. Spread of scent from perfumes and air fresheners

When you spray perfumes or use an air freshener from one point in a room, the scent spreads through the room and even to the next.

Baked wheat products such as cakes, biscuits, and fruit juices come in different colors. Color additives are added to the drinks in small portions and diffuse through the glass, giving it the desired color.

This adds an aesthetic value to the drink and serves to distinguish between different flavors.

Imagine a situation where all fruit drinks were colorless; wouldn’t it be hectic picking your favorite brand from the shelves?

5. Removal of waste products from the body

Waste products such as urea, glucose salts, and amino acids are removed from the glomerulus in the kidney by passive transport. This is because they are small, and their concentration is low in the Bowman’s capsule.

Reabsorption of water from these waste products before they are removed from the body in urine also takes place through passive transport.

In the liver, amino acids are deaminated before leaving the body in the form of urine. After forming urea from the amino group, it is released into the bloodstream, low concentration through passive transport.

It is then passed to urine, after which it is excreted.

6. Transport and gaseous exchange in plants

The roots absorb water from the soil through osmosis, a type of passive transport.

The concentration of water molecules in the soil is high compared to the root cell sap, which contains dissolved substances.

A concentration gradient exists between the juice in the root hair cells and the soil water.

Water molecules from the soil move to the region of low concentration through the root cell membrane.

Carbon dioxide is highly concentrated in the plants after metabolic processes.  It diffuses to the atmosphere, where its concentration is low.

You may have heard someone taking a soda t say, “it is flat,” after some time. This means that the soda lacks the fizzing effect.

Industrial processes such as the Haber and Contact process emit poisonous gases to the atmosphere. These gases include sulfur dioxide and nitrogen dioxide. The effect of these gases spreads through a wide area through diffusion.

When solid and liquid effluents find their way to water bodies such as lakes, they spread, causing water pollution.